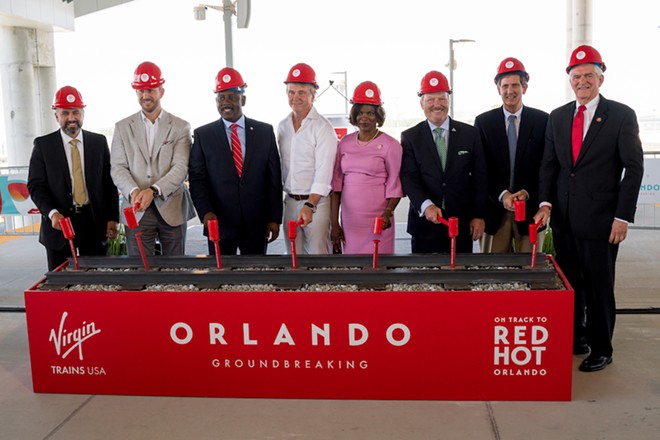 This is the company’s second phase to expand what is already the nation’s largest privately funded infrastructure project. Virgin hosted more than a hundred guests at a ceremony on the newly completed intermodal platform, including national reporters from outlets like NPR and CBS News.

Missing from the festivities was Virgin Group founder Richard Branson, a minority owner in the train company through a brand partnership to use the Virgin name. Also missing was any mention of Disney, or of a possible connection to SunRail and other forms of transportation.

In an April press release touting the Orlando expansion, Virgin suggested possible stops at Disney, connecting to the Meadow Woods SunRail and Lynx stop. Since then, Virgin representatives have stayed mum on the subject, deflecting inquiries until today’s event. But there was no mention today of Disney or any specifics outside the West Palm connection.

The closest Virgin Trains USA President Patrick Goddard came to mentioning Disney today was in speaking to reporters afterward, when he described the event as “creating a new era of travel that connects pairs of cities that are too close to fly and too far to drive,” adding, “that certainly is needed here in a city that is one of the most magical places on Earth.”

When asked separately about the proposed Virgin stop at the Meadow Woods SunRail station, both Goddard and Virgin Trains Chairman Wes Edens took pains to avoid revealing any information.

“We are working with CXS and FDOT now on regulatory processes and land leases,” said Goddard, an answer similar to ones given by company representatives. When asked if there were any current obstacles to a Disney stop, neither executive said yes or no.

When Orlando Weekly contacted the Florida DOT to inquire about any plans to connect Virgin and SunRail, a representative said, “If there is I am not aware of it, but I can check with the team here. For Virgin-related matters you should reach out to them directly,” adding, “Virgin is a private group, for anything related to them you have to contact them.”