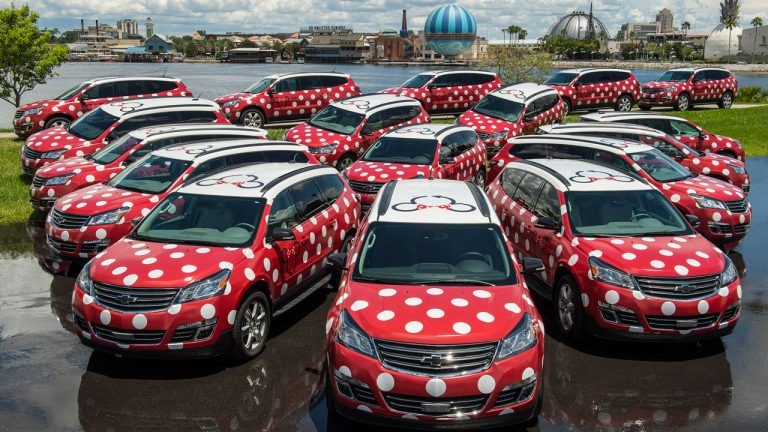 When the Lyft-managed Minnie Van service launched at Walt Disney World in late July 2017, some questioned the paid transportation option in a place that is known for providing free transit for all guests. Now 23 months later, the service has surpassed a significant milestone: transporting more than one million guests. That is more than 43,000 guests per month. That means that this upcharge luxury service attracts nearly a third of the ridership that SunRail draws on a daily basis. It also provides important data points for those arguing for low-cost or free mass transit options in other markets.

The Minnie Van program is a collection of more than 50 Chevrolet SUVs wrapped in a distinct Minnie Mouse theme, red with white polka dots. The vans are driven by Disney-vetted and -trained Cast Members and the service provides access across Walt Disney World, Orlando International Airport and Port Canaveral. Guests can request Minnie Vans via the Lyft mobile app alongside other Lyft options.

The success of the Minnie Van program has led to Lyft becoming the “official rideshare of Walt Disney World Resort and Disneyland Resort.” The partnership promises even more enhancements slated to launch this fall: a smoother experience in requesting a van, enhanced ability to request a wheelchair-accessible ride, and "more convenient" pick-up locations.

Minnie Vans already use the bus drop-off areas at some sites, including the Magic Kingdom. The improved pick-up locations could mean new and better-marked designated areas that seem to be in the works for the parks. Public construction documents posted within the last few months show what seems to be a Minnie Van-exclusive area heading to Magic Kingdom’s bus drop loops. Similar ones also look to be in the works for Disney’s Hollywood Studios, Animal Kingdom, and Epcot.

The partnership with Lyft includes both WDW and Disneyland. There's no word yet whether the WDW Minnie Van service will eventually be expanded to Disneyland.