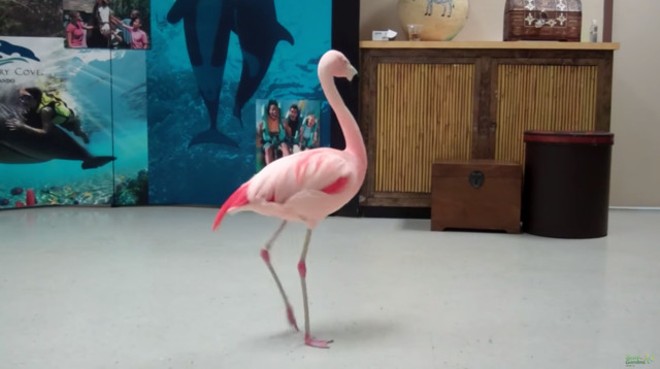 Joseph Anthony Carrao, an Orlando man who gained notoriety for allegedly murdering a flamingo named “Pinky” three years ago at Busch Gardens, was recently hit and killed by a truck.

According to the Florida Highway Patrol, the 48-year-old was hit by a Ford F-150 pickup truck while crossing State Road 50, near his Orlando home on June 5.

Carrao was transported to Florida Hospital East where he later died.

The truck driver was not cited.

Carrao was set to face trial this summer for animal cruelty charges stemming from an incident in August, 2016, where he allegedly reached into the animal pen at Jambo Junction in Busch Gardens and slammed a 15-year-old Chilean flamingo to the ground.

The flamingo, who was one of the park’s dancing animal ambassadors and named “Pinky,” was injured so badly it needed to be euthanized.

Following his arrest, a petition circulated calling for Carrao to face "harsher punishments."
"Pinky was well-known as a sweetheart who loved to perform for humans,” said petition author Janis Restivo, a Tampa resident. “This man killed a defenseless animal after getting out of prison for shooting two dogs."

According to the Tampa Bay Times, as Carrao’s case moved through court, his defender ordered two psychological exams over concerns of his mental health. One examiner found that Corrao suffered from “a combination of post-traumatic stress disorder, bipolar disorder and schizophrenia.”"

Both agreed with the schizophrenia diagnosis, and said he was incompetent to proceed with the trial."


In hearing on the matter, a judge was told that Corrao's condition rose to the level of a disability and that he lived on Social Security payments."

The prosecution began moving again in March after Corrao was declared competent. A trial date was set for August."


After learning of Carrao’s death, all charges were eventually dropped by prosecutors, reports the Times."