As being tapped to cohost the recent debut of Terri Binion’s excellent Duets event proves, Jordan Foley’s stock in the Central Florida Americana scene is rising. The emerging local folk-rocker first convinced me with a compelling solo set opening up for David Dondero here last autumn. Even with just an acoustic guitar and a microphone, Foley’s expression was noteworthy for the cultivated richness of his singing. 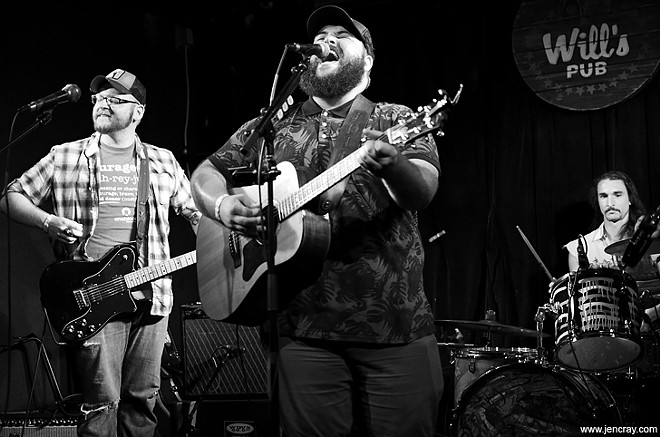 But the man’s got a band called Jordan Foley & the Wheelhouse, and they are on a whole other plane. Hearing his vigorous, stirring voice on its own is moving thing, but seeing it flanked and given full wing by a five-piece ensemble is a splendor.

His supporting cast is stocked with quality players and singers. Together, they make for a country-rock outfit that’s lush, articulated and muscular.

The night yielded a nice discovery in opening Gainesville artist Kyle Keller. His warm voice is a gentle foil for the dark, rustic soil he tills in his songs, loam that ranges from deep heartache to occasional Southern Gothic tones.

It’s earnest, emotionally haunted music that drifts through the shadows with a quiet, earthy radiance. Besides his own acoustic guitar and harmonica, Keller performed with the accompaniment of Tampa musician Taylor Raynor on fiddle, which punctuated the more harrowing edges of his loneliest songs nicely.

Also on the bill was Leon Majcen, a very young artist from the Tampa Bay area now based in New York City. Although his balmy sensibility generally sticks to the middle lane, perhaps to a beige fault sometimes, he does play his folk music with some polish, soul and a light twang. Right now, though, it’s more pleasant than distinctive.