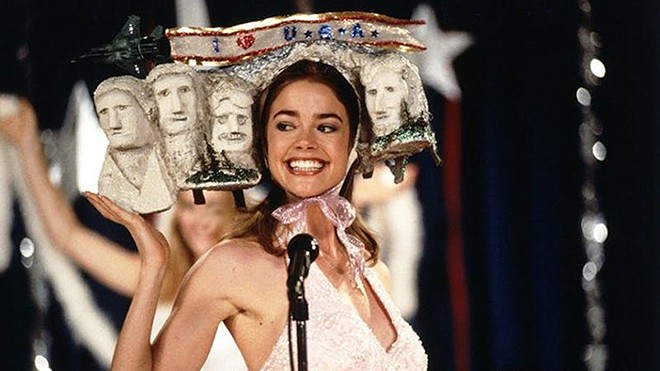 Movie nerds often recognize 1999 as a significant year in film. It brought us Fight Club, The Sixth Sense, American Beauty, Magnolia, Being John Malkovich and so many others. But one 1999 cult comedy that has never gotten the respect it absolutely deserves is Drop Dead Gorgeous. Part of that's due to the fact that the market was flooded with teen melodramas like 10 Things I Hate About You, She's All That, and so on. The marketing for Drop Dead Gorgeous made it seem like it was following in that trend, but it  both lampoons and transcends genre.

The mockumentary, directed by The State alum Michael Patrick Jann, explores the lives of teen beauty pageant contestants in the fictional small town of beautiful Mount Rose, Minnesota, former home of the world's oldest living Lutheran. ("Every year, every damn year I say take down the goddamn Freda sign, you lazy sons of bitches." - Mayor of Mount Rose)

The central rivalry is between working-class sweetheart Amber Atkins (Kirsten Dunst) and spoiled mean girl Becky Leeman (Denise Richards.) When contestants start getting murdered, a very obvious mystery is set up as to who’s knocking off the contestants, but the mystery isn’t the point. Rather, the supporting cast, including Ellen Barkin as Amber’s mom, Allison Janney as her promiscuous neighbor, Amy Adams (way before she became a perennial Academy Award nominee and Golden Globe winner) and the beloved Brittany Murphy, (ten years before she tragically died of pneumonia – not suicide or a drug overdose as internet memes seem to think), creates a completely believable – if hilariously bizarre – small town ruled over by Queen Bitch Gladys Leeman (Kirstie Alley, in maybe her greatest role ever).

The movie barely made an impact at the box office, but once it hit DVD, word of mouth made it a bona fide cult hit, and it’s probably the film that this so-called film critic has seen more than any other movie. Enzian programmer Tim Anderson scored a huge coup with this screening, which takes place on the 20th anniversary of the original theatrical release, meaning that Drop Dead Gorgeous can finally get the attention is deserves for its birthday. You’ve had 20 years to catch up. Don’t miss your chance again.