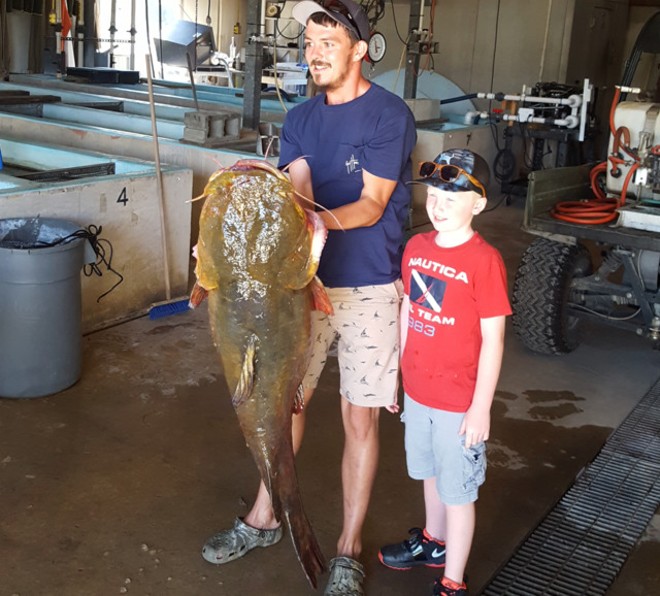 Griffin says he caught the giant catfish using live bait on the Yellow River, which runs from Alabama and empties into Florida's Blackwater Bay.

“I wasn’t expecting to catch a state record when I started fishing that day with John Babb,” said Griffin in a statement. “But, it was the first and only fish we caught that day. I never would have been able to bring the fish into the boat without his help.”

Griffin brought the fish to the FWC’s Blackwater Hatchery near Holt, where biologists weighed and certified it as the new state record. Authorities say Griffin's catch was 69.3 pounds and 47 inches long, with a girth of 34.25 inches.

According to the FWC, flathead catfish are a non-native species that feed on live fish, crawfish, freshwater clams and mussels, and are mostly found in the Panhandle river systems.

Coincidentally, Griffin’s uncle, James Auston Jr., previously held the state record for flathead catfish (which he also caught in the Yellow River) from 2011 until 2016, when a fisherman on the Chattahoochee River beat the record with a 63.8-pound flathead.

“A state record catch is an amazing angling accomplishment,” said Chris Paxton, FWC’s Northwest Regional Fisheries Administrator. “With Griffin’s family history of state record catches, it seems that this family takes advantage of their quality time spent on the water. We are proud to award this state record to such an avid outdoor enthusiast.”

“I have always wanted to catch a state record,” said Griffin. “After my uncle caught his, I made it a mission of mine to catch my own.”

If you think you snagged a record-setting freshwater fish in Florida you should contact your nearest regional office to have your catch weighed on a certified scale. Also, you can compare your catch with the FWC’s state record database.