The Circle continues to be one of the most compelling singer-songwriter showcases going right now, one that not just presents a constantly reloading roster of Florida talent but gives you revealing peeks into the artists’ souls through the cover songs they hand-pick to perform in the first two sets of the night. These choices are no tip-baiting requests, they’re looks behind the curtain that show the scope of their musical perspectives in ways their own material may not so clearly reveal. You can read the full breakdown of the Circle’s format here.

This weekly summit is usually led by local Southern rock savior Thomas Wynn. But in his stead, eminent alt-country artist (and Wynn’s wife) Hannah Harber recently headed up an exciting edition, adding cred to one of the pound-for-pound deepest bills of the series so far.

In addition to having Harber’s strong, sharp vocal presence in the mix, this night’s guest players are some of the most impressive voices in the Central Florida Americana scene. Will Quinlan has long been one of the most respected names from the Tampa Bay area for good reason. And local Patrick Hagerman very recently upped his profile with one of the best performances at Terri Binion’s auspicious Duets event.

Between the three refined twangsters emerged an evening of thoughtful song selections played with love and integrity. As usual, Harber continued her sterling streak of tasteful Americana with choices from Guy Clark, Patty Griffin and Townes Van Zandt. But this particular cast carried equal bona fides in their wells of inspiration. 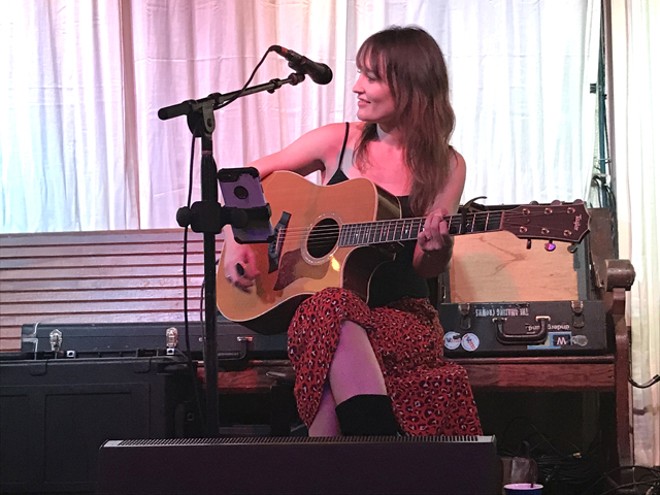 Quinlan drew from a nicely varied repertoire – selections from Gillian Welch, R.E.M., Tom Petty, Faces, Neil Young and Drivin N Cryin – and graced them with the silver of his immaculate and sylvan voice.

Hagerman proved to be an all-around force. Taking most of the guitar leads for the group with conviction, he emerged as a real player. And in the rendition of his personal picks from Jason Isbell, Robert Earl Keen, Wilco and Dylan, Hagerman showed himself a man of deep, churning soul. But he earned the night’s biggest points when he got legit local with an excellent Terri Binion cover. And bonus for not just covering Lucinda Williams but referring to her as the person “who sings backup vocals for Terri Binion.”

Together, Harber, Quinlan and Hagerman were a notably synthesized unit for an unrehearsed, ad hoc ensemble. These soloists did their homework and came ready to play together.

To recap, that was 17 covers just for this one show. That’s what happens every Tuesday at the Circle, and that’s what makes it one of this year’s best new showcases. Seeing how it’s gone so far, the Circle is turning out to be as fresh and evergreen as it was designed to be.