THIS LITTLE UNDERGROUND
Getting Away With It Fridays, Remix Record Shop, July 5

Gather round, kids. Here’s some music lore for you. Once upon a time, people had to purchase music! Even more fantastical, they had to travel – yes, over mountain and wood – to record shops to procure it on physical media, arcane materials like wax, disc, tape and probably flint or something. Some of these record shops even developed into outposts of society unto themselves. Seriously! Watch High Fidelity, Pretty in Pink, shit, even Empire Records if you must.

Anyway, though nothing like in ye golden olden times, that great record store culture still exists in our city. Park Ave CDs, Orlando’s flagship independent record store, is both testament to and bastion for that with their excellent and well-known in-store performances. Public events and other such gatherings at other record stores, however, are slim pickings. But a good and notable one that’s been happening on the reg this year is Getting Away With It at Remix Record Shop.

Anchored by legendary local DJ and walking, spinning music library Smilin Dan, Friday nights at this Mills 50 house of vinyl have become an after-hours happening. From 9:00 pm till 1:00 am, he spins live while the store becomes a real hangout, dispensing beer and wine for free or donations. In case you couldn’t deduce from the name, Getting Away With It is dedicated to classic alternative music (circa 1980-1994). More than just an Electronic reference though, Smilin Dan flexes this weekly affair as an opportunity to reach way down into the crates and break out deep cuts and forgotten gems, something he couldn’t always do at his popular nights at Independent Bar and Cairo.

To make each GAWI event distinct – and therefore a destination worth repeat visits – he narrows the focus with a different theme every week. On this recent visit, the spotlight was on 1980s alternative music videos so the scene in the shop was essentially an in-person, live-mixed 120 Minutes. With all the colorful, generation-defining time stamps, it almost doesn’t get any more pop-culturally transporting than that. 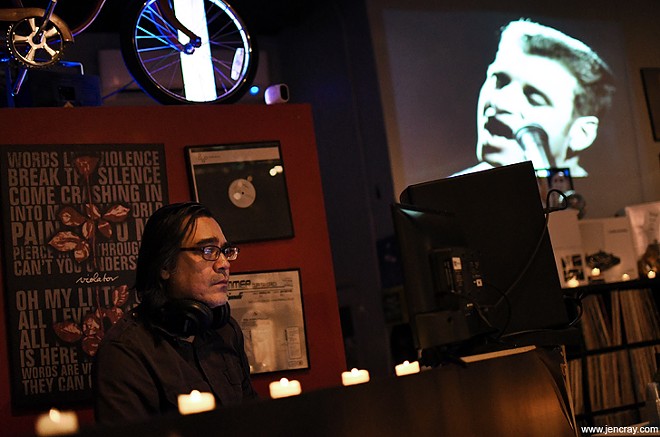 The wide and prismatic range spun included the Chameleons, Suicidal Tendencies, Cabaret Voltaire, Boxcar, the Beautiful South and beyond into Shazam-necessitating depths (Hubert Kah, anyone?). Between the sounds and images, it was a trip that showed how immersive and even novel a tried theme can be when done with this much scope and memory. By transforming the record store into a music bar by night, GAWI gives you the moving music without the dance club politics.

Conceived as an event, GAWI is an intimate, relaxed gathering that embodies the ideal of the record shop as something beyond mere place of commerce. The mark of any true and great record shop is being in good hands and good company. Getting Away With It is all that, only with drinks and an expertly and lovingly hand-picked soundtrack. Besides, any vinyl shop that’s equipped with a permanent pro DJ booth is legit in my book. Go listen, hang and talk music with some true heads.