by Xander Peters and Jenna Lyons 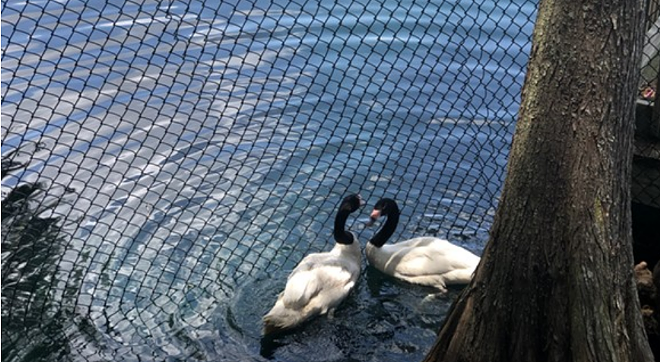 More than a month after the made-for-internet love story began, the courting of "Queenie," Lake Eola's lone female black-necked swan, is over after one of her two potential male partners died today, city officials say.

It's unclear whether Queenie and the late swan had ever crossed the plateau of becoming star-crossed lovers – and the same could be said for the lone male swan who's been left to hit on Queenie. City officials say they're unsure of what exactly was the cause behind the male swan's untimely demise.

"The health and well-being of the swans and all animals at our parks are a top priority," a statement from the city of Orlando on Twitter reads. "Thank you for your continued love and support for our swans."

Prior to their release nearly two weeks ago, the male duo were confined to one of the lake's fenced-in corners, forced to watch Queenie strut her stuff from across Lake Eola as they underwent a temporary acclimation period.

The inspiration to find Queenie a new mate after she lost her former mate to a popcorn overdose five years ago (note: popcorn is a bad thing to feed swans) came from local resident Shawn Pennington, who said his idea of getting involved in local government was inspired by the NBC sitcom Parks and Recreation.

"I decided that I really needed to find someone who would share my belief that it's worth taking a risk to make something good happen," Pennington said at the male swans' unveiling in May.