Disney's Star Wars: Rise of the Resistance ride will open in Orlando first

Disney announced Thursday the opening date for its new Florida Star Wars attraction. They've set expectations high, planning to make the attraction public on the birthday of Walt Disney himself. 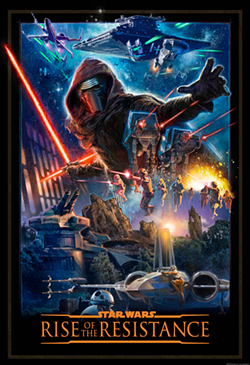 Star Wars: Rise of the Resistance will open Dec. 5 at Disney's Hollywood Studios at Walt Disney World in Orlando, promising to "blur the lines between fantasy and reality" for their guests.

"What better way to honor the ultimate storyteller than by introducing the most immersive and advanced attraction ever imagined in a Disney Park?" rhetorically asked the Disney announcement.

The ride will feature the new school of Star Wars heroes and villains. It starts with an invitation from Rey and General Organa to join them at a secret base, and ends with an escape mission from a First Order Star Destroyer. Visitors can expect Kylo Ren to be featured as well.

The California version will hit Disneyland on Jan. 17.