Stinky, slimy seaweed piled up on Florida beaches may be the new normal 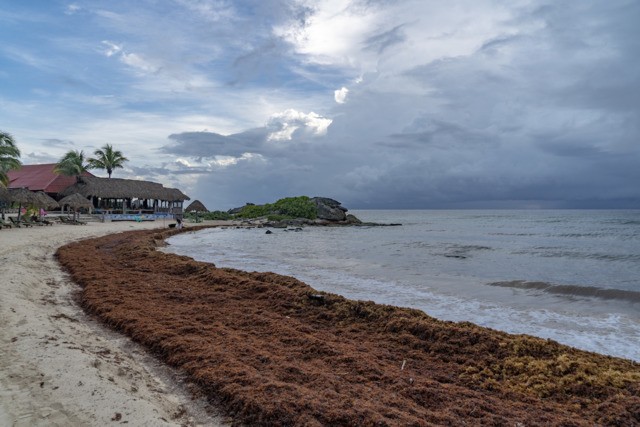 A new study led by scientists from the University of South Florida-St. Petersburg suggests that the waves of foul-smelling, brown seaweed known as sargassum blanketing South Florida and Caribbean beaches are part of the world's largest macroalgal bloom, and it might be here to stay.

According to the study, there has been an explosive growth of sargassum in the Atlantic Ocean since 2011. Referred to as the Great Atlantic Sargassum Belt, this seasonally recurring sargassum growth often stretches from West Africa to the Gulf of Mexico, and weighs more than 20 million metric tons, according to satellite imagery. This makes the Great Atlantic Sargassum Belt the largest macroalgal bloom alive.

Sargassum is common in the appropriately named Sargasso Sea region of the north Atlantic, and can be found in smaller quantities throughout the ocean. (The sea was named for the weed, not the other way around.) Under these circumstances, sargassum seaweed actually provides a necessary ecosystem for some species of eels, sea turtles, crabs, fish and ocean-going birds.

The explosive appearance of the Great Atlantic Sargassum Belt, however, poses a number of problems for both animals and humans.

As sargassum decays, it produces hydrogen sulfide, a gas that smells like rotten eggs or sewage, which can cause breathing problems for beachgoers and boaters with asthma.

In addition to medical concerns, thick layers of sargassum have impacted the fishing trade by blocking boats from launch, halting propellers and tangling nets. Oxygen-dependent ocean-dweller like sea turtles and dolphins may suffocate in their efforts to surface through the thick, entangled bloom, according to researchers.

Scientists from the USF study speculate that the development of the Great Atlantic Sargassum Belt may be caused, in part, by increased nutrient discharge from an upwelling off the coast of West Africa during boreal winter and by Amazon River discharge during spring and summer. These factors, combined with moderate temperatures and the presence of seeds from the previous years’ blooms suggest that these seasonal blooms may be the new normal.