Florida taxpayers will pay more than $131,000 for costs of state cabinet trip to Israel 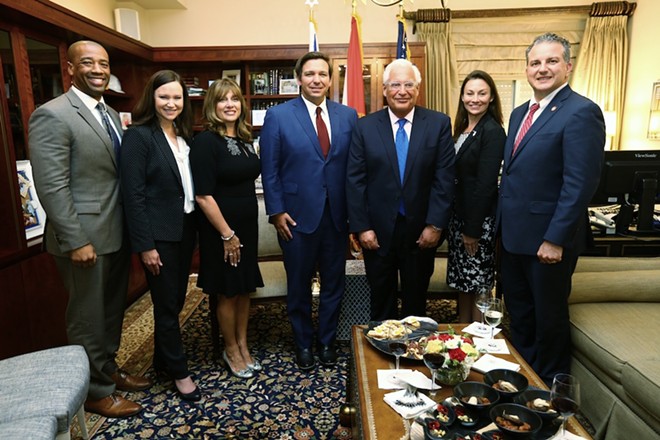 More than a month after Gov. Ron DeSantis and Florida Cabinet members wrapped up a six-day trip in Israel, the price tag of the mostly privately funded trip was revealed on Friday.

The costs for the trip, in which the governor traveled to Tel Aviv and Jerusalem with a delegation of nearly 100 people, totaled $442,504, with private donors covering more than two-thirds of the bill.

Florida taxpayers, however, were hit with a tab of more than $131,000 to cover lodging, airfare and other travel costs for Agriculture Commissioner Nikki Fried, three of her aides, Chief Financial Officer Jimmy Patronis’ chief of staff, Attorney General Ashley Moody’s general counsel, three staffers with the governor’s office and security provided by the Florida Department of Law Enforcement.

The $131,000 cost also included travel expenses for Enterprise Florida staffers, according to documents released by the state economic-development agency Friday.

A month after the trip, Goldman, who was a co-chairman of the Israel trade delegation, contributed $2,000 to the governor’s political committee, according to information posted on the Friends of Ron DeSantis website.

The trip to Israel, proposed by DeSantis in April after declaring he wanted to become the most “pro-Israel governor in America,” became controversial when the governor announced it would include a Cabinet meeting.

A day before the meeting was held inside the U.S. Embassy in Jerusalem, media organizations unsuccessfully sued, arguing the plan violated Florida’s open meeting laws.

DeSantis called the lawsuit “frivolous” and said the Cabinet meeting was being livestreamed to the state Capitol, where the Cabinet usually meets, “so it’s not being done in secret.”

The governor’s office has remained mum about the cost of the trip, referring all questions to Enterprise Florida, which helped plan the excursion.

DeSantis’ office did not respond to questions Friday seeking comment about more than $9,000 in state-funded expenses incurred by three staffers in the governor’s office.

While in Jerusalem, members of the delegations stayed at David Citadel, a five-star luxury hotel selected by Enterprise Florida which cost $425 per night.

Enterprise Florida spokeswoman Kathleen Keenan said the hotel was chosen because of security concerns and consideration of room capacity to accommodate the large delegation.

Delegates included economic-development partners, representatives of communities, and legislators who paid their own expenses on the trip, according to Enterprise Florida.

Enterprise Florida’s final tally of expenses associated with the trip also included a “revenue” section. The $200,000 in revenue included $72,827 in “state reimbursement (security, transportation and EOG staff travel),” which includes about $9,000 for three of DeSantis’ aides and $63,000 for security provided by the Florida Department of Law Enforcement, according to Keenan. The reported revenue also included $7,500 for “press registration,” $71,500 for “delegation registration,” and $47,500 for “sponsorships.”