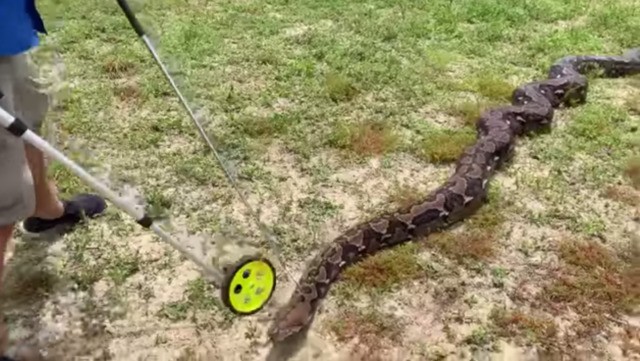 A 200-pound, 20-foot-long reticulated python named “Ginormica” will likely be the longest captive snake ever recorded. The snake lives in Crestivew, a Florida panhandle town east of Pensacola.

That is, if everything goes to plan for Emerald Coast Zoo co-owner Rick de Ridder, aka "The Reptile Guy,” who says he feeds his 6-year-old female monster a healthy diet of frozen goats and pigs, reports nwfdailynews.com.

Ridder told the news site that Ginormica is likely already the largest snake in Florida and could easily reach the age of 75 years old, which gives her a solid chance of hitting the current world record.

According to Guinness World Records, the ever longest snake in captivity right now is – and we cannot stress highly enough that you should not click this link if you're easily startled or disgusted – “Medusa,” a Kansas City-based reticulated python, who is just slightly over 25 feet long. Reticulated pythons are not native to Florida and primarily populate southeast Asia and Indonesia.