One the more intriguing theme nights that’s emerged lately in the city’s live music landscape is Twang Metal Monday at Will’s Pub. The idea is an evening of heavy metal covers reinterpreted as country songs. Of course this Hayseed Dixie-esque concept could fall short – gimmicks always abound with irresistibly ripe low-hanging fruit – but it’s an unholy matrimony I can get down with in theory.

Hatched and organized by frontman P. Taylor Hodges of Orlando trad-country act Catfish Dinner, this fledgling series features Catfish Dinner alongside area musicians willing to play along and honk up the metal. The recent second edition’s guests included Trig Johnson and Zack Maruniak, whose individual sets had varying degrees of fidelity to the theme.

Trig Johnson opened the night with some picks that, though neither metal nor especially heavy, were at least studious and obscure like Lloyd Cole. But he gets full credit for twisting the psychotic rage of Ministry’s “Stigmata” into a slinky come-on. Pretty sure that’s a first.

Zack Maruniak, however, played it in a jam-dude way that was not metal, not country and, even less forgivable, totally soft-core.

Like some unwitting victim of a cruel performance setup, he proffered a setlist that ranged from not metal (Eddie Money, Bon Jovi, Journey) to the straight-up antithesis of metal (Depeche Mode, Eurythmics, fucking Night Ranger). The closest he got was a Guns N’ Roses cover, but that was the distinctly radio-friendly “Sweet Child O’ Mine.”

Host band Catfish Dinner, however, did it right. With a loose-limbed honky-tonk step, the five-piece combo charged through a set that included Ozzy, Guns N’ Roses, Motörhead, Alice in Chains and KISS. 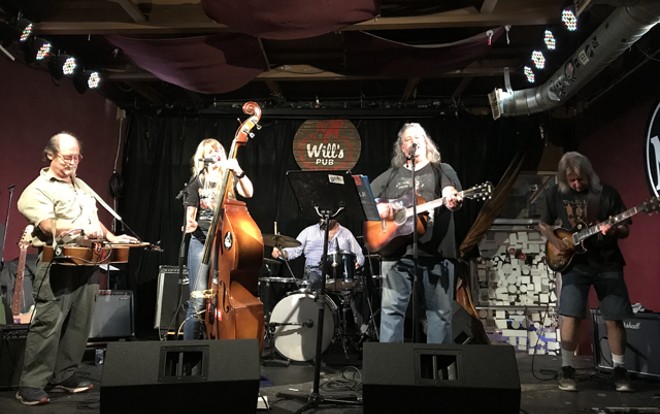 And although few self-respecting headbangers would claim Warrant’s “Cherry Pie” as metal, it’s almost as hilarious as a country song. Almost.

A covers night with a nice hook, Twang Metal Monday is a fun, relaxed night out. More thematic commitment by the guest participants would be nice to keep it true to its name, though.

It’s an event worth having because probably few things are more head-on Florida than the collision of country and metal. And this, apparently, is what some elementary school teachers (which is what the event’s creator mentioned he was) do by night. Yeah, the kids are gonna be all right.

The next one’s already booked at Will’s on Aug. 12, so mark your calendars. Or better yet, try to get on the bill yourselves. But maybe Google “heavy metal” first.