The city's second pilot phase with the software, called Rekognition, began in October 2018 using four cameras at the police department's headquarters, three in downtown and one outside a community recreation center. The technology is designed to automatically identify and track suspects in real-time using facial recognition algorithms.


"At this time, the city was not able to dedicate the resources to the pilot to enable us to make any noticeable progress toward completing the needed configuration and testing," Orlando's Chief Administrative Office said in a memo to City Council, adding that the city has "no immediate plans regarding future pilots to explore this type of facial recognition technology."

The pilot program started in December 2017 and the second phase was slated to expire on Thursday. After the first phase, which ended in June 2018, the city mulled for weeks whether to continue testing, eventually starting the second phase in October 2018. The decision to cut ties with Amazon Rekognition when the second phase ended Thursday was swift.

An Amazon Web Services spokesperson said in a statement “we believe our customers – including law enforcement agencies and other groups working to keep our communities safe – should have access to the best technology.”

“Over the past several months, we’ve talked to customers, researchers, academics, policymakers, and others to understand how to best balance the benefits of facial recognition with the potential risks,” the spokesperson said in an email, citing an AWS blogpost that says police should analyze faces returned by a Rekognition search and only consider results if it shows a 99 percent confidence threshold.

The American Civil Liberties Union brought Orlando's pilot with Amazon to light in May 2018, triggering nationwide pushback from civil rights groups concerned about privacy breaches, the technology's potential for abuse and its tendency to misidentify dark-skinned women more frequently than white men.

“This failed pilot program demonstrates precisely why surveillance decisions should be made by the public through their elected leaders, and not by corporations secretly lobbying police officials to deploy dangerous systems against the public,” Cagle said.

Florida currently has no laws regulating the use of facial recognition. Two cities in California and Somerville, Massachusetts have banned police use of the technology.

The memo said Orlando would continue to seek other advances in technology, “further supporting our city’s mission to become America’s premier Future-Ready City.”

Ideally, officers would have been able to upload a photo of someone's face to the system and receive an alert when Rekognition found a match within live surveillance camera streams. Amazon employees made numerous visits to City Hall throughout the pilot to outfit Rekognition on the city's network for free, but even in second-phase testing, little progress was made for Orlando.

"We haven't even established a stream today. We're talking about more than a year later," Rosa Akhtarkhavari, Orlando's chief information officer, said in an interview with Orlando Weekly during the second pilot. "We have not, today, established a reliable stream."

Related Under Orlando’s real-time surveillance partnership with Amazon, everyone’s a suspect: All eyes on us

Under Orlando’s real-time surveillance partnership with Amazon, everyone’s a suspect
All eyes on us
By Monivette Cordeiro, Joey Roulette and Colin Wolf
News

Akhtarkhavari, Orlando's technology czar who spearheaded the pilot, said bandwidth issues prevented city staff from running the powerful software in conjunction with any more than one camera — and sometimes that signal wouldn't work as expected. "We've never gotten to the point to test images," she said.

Orlando's surveillance cameras lacked the right video resolution to get clear images of the group of officers volunteering as subjects, and the height at which each camera was positioned — roughly 10 feet from the ground — meant only the tops of their heads would show up in streams, according to a person who helped the city install Rekognition during the pilot's first phase. The person, who asked not to be named for this story because of a confidentiality agreement, said video feeds would randomly disconnect whenever officials could get a stream running with the software. 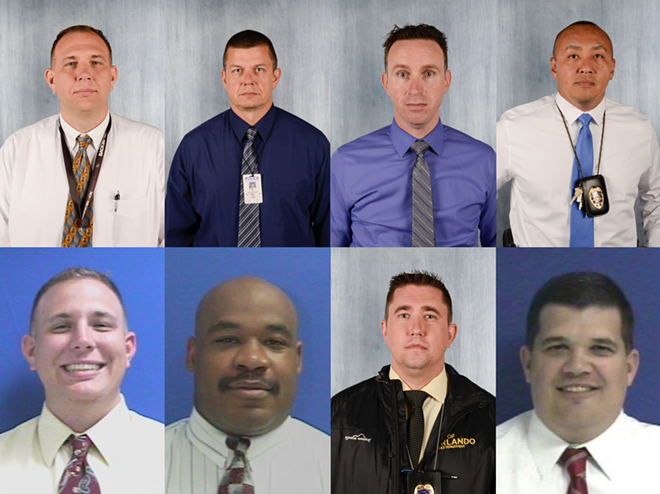 The Orlando Police Department ran into similar bandwidth issues in 2017 when researchers at the University of Central Florida's Computer Vision department tested real-time, predictive action recognition software on ten surveillance cameras outside downtown. The test ended after a year with little progress, mainly because OPD and City Hall lacked the personnel capable of maintaining such an advanced — and yet unproven — system that was designed to learn on its own, constantly gathering visual clues in surveillance videos to inform how accurately it could see what comes next through the lens of public cameras.

Orlando is the only city in the country to openly test Amazon's fledgling real-time facial recognition software. Washington County Sheriff's Office in Oregon is the only other known client using a variant of the software, where deputies can upload a photo of an unidentified suspect and run it through a database of images for a possible match long after an incident occurred.

Related In Florida, facial recognition is advancing faster than lawmakers can regulate it

In Florida, facial recognition is advancing faster than lawmakers can regulate it
By Joey Roulette
Blogs

After a 15-month Rekognition pilot marred by technical hurdles, it's unclear how Seattle-based tech giant Amazon will aim to build on its investment, having flown teams to Orlando to help build out the software at no cost to the city.

Rekognition, based on machine-learning algorithms whose accuracy to identify faces is only as good as the data it trained with, relies on the so-called MegaFace dataset of nearly 5 million face photos and two other datasets that Amazon shrouds as proprietary.

Surveillance feeds can provide valuable data for machine-learning-based facial recognition software, and are used by universities to develop technologies similar to Rekognition.

An extension to Orlando’s contract with Amazon in 2017 for the Rekognition pilot — when it was called a “Beta Service” — says any data ingested from the city “may be stored and used to develop and improve” the “machine-learning, artificial intelligence and similar functionality” for Amazon Web Services and its “affiliates.”

Cassandra Lafser, a spokeswoman for the city, said Amazon does not store any city data and the Beta terms were never agreed to, even though the document said it supplements any kind of existing agreement the city has with Amazon. Akhtarkhavari did not know whether the terms were agreed to months after an Amazon employee sent it to the city, according to an email with Orlando’s chief procurement officer, David Billingsley.

Billingsley did not respond to multiple requests for comment, and Lafser was unwilling to coordinate an interview between the purchasing official and Orlando Weekly.

This story was updated to include a statement from an Amazon Web Services spokesperson and note that the second phase of the pilot program was slated to end Thursday.