Nobody wants these embarrassing Confederate statues in Florida, and that includes eight Lake County mayors 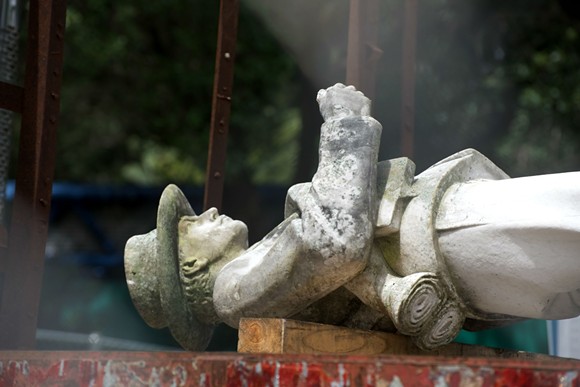 Mayors from across Lake County want Gov. Ron DeSantis to prevent the statue of a Confederate general that has represented Florida in the nation’s capital for nearly a century from being displayed in their community.

“The bitter irony is the proposed location is a museum located in the same building where 70 years ago the Groveland Four had their lives and reputations ruined,” the letter said. “The decision to move this statue was made by a small group who neither answers to or represents the public. We eight mayors represent 146,165 residents.”

DeSantis and the state Cabinet in January gave long-sought posthumous pardons to four black men, known as the “Groveland Four,” who in 1949 were accused of raping a white woman in Lake County.

Related The terrible true story of the Orlando Sentinel’s involvement in the Groveland Four shootings: Blood on the press

The terrible true story of the Orlando Sentinel’s involvement in the Groveland Four shootings
Blood on the press
By Mark I. Pinsky
News

Smith’s statue has represented Florida in the National Statuary Hall in the U.S. Capitol since the 1920s. It is being replaced by a statue of civil-rights leader and educator Mary McLeod Bethune, a move that lawmakers approved in 2018.

A state panel last year considered proposals for relocating the Smith statue and backed a plan to move it to the Lake County museum.

Representatives for DeSantis didn’t immediately respond to a request for comment on Thursday. Sarah Revell, a spokeswoman for Secretary of State Laurel Lee, said Department of State officials had not received the letter from the Lake County mayors.

The letter, pushed by Tavares Mayor Troy Singer, has also been supported by the mayors of Clermont, Eustis, Groveland, Leesburg, Mascotte and Minneola.

Museum curator Bob Grenier, who has played a key role in the effort to bring the Smith statue to the county, could not be immediately reached for comment on Thursday.

Grenier told the Daily Commercial in Leesburg that relics allow the museum to fulfill its mission of preserving and educating the public, with the statue to be included among veteran and military artifacts.

“Our mission is to preserve history and relics so that future generations can learn from them,” Grenier told the paper. “There is no racial bias amongst the individuals running the museum.”

Mount Dora City Council members, who had earlier approved a resolution against the statue, noted during their meeting Tuesday that a protest march is planned for Aug. 10 in Tavares.

The resolution previously approved by the Mount Dora City Council said Smith has no connection to their community and his statute “represents hate, hurt and the separation of families to the citizens of Mount Dora.”

Smith was born in St. Augustine but had few ties to Florida as an adult. As commander of Confederate forces west of the Mississippi, Smith was considered the last general with a major field force to surrender.

DeSantis sent a formal request July 10 to the architect of the U.S. Capitol to substitute the Bethune statue for the Smith likeness.

As part of DeSantis’ request, he noted that the Smith statue would be relocated to the Lake County museum as a Florida Department of State exhibition and long-term loan.

Each state is allowed two statues in the national hall. Florida's other statue is of John Gorrie, widely considered the father of air conditioning.

Bethune, who will become the first African American woman honored by a state in the national hall, founded what became Bethune-Cookman University in Daytona Beach and later worked as an adviser to President Franklin Roosevelt.

The 9-foot marble statue of Bethune, under construction in Italy, is expected to arrive at the nation’s capital in 2020.

State lawmakers voted in 2016 to replace the Smith statue, amid a nationwide backlash against Confederate symbols that followed the 2015 shooting deaths of nine black worshippers at a historic black church in Charleston, S.C. They decided in 2018 to make Bethune the replacement.