Is Tesla headed to Tomorrowland? Disney says no, but there might be more to this rumor 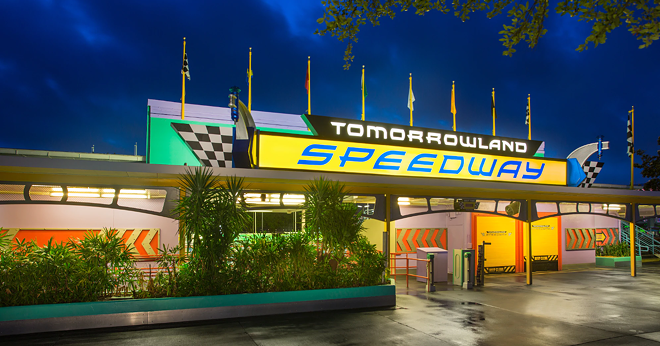 Rumors of the demise (or update) of the Tomorrowland Speedway at the Magic Kingdom date back years now, but as we move closer to the WDW 50th Anniversary in 2021 it's looking all the more likely that something will happen soon. In a rare move, this time Disney itself has even commented on the rumors.

Ahead of the 2017 D23 Expo, multiple sources familiar with Disney’s plans stated that the go-kart attraction would be replaced with a new high thrills indoor/outdoor coaster. Ultimately, that attraction was confirmed to be the Tron-themed coaster now under construction, but instead of replacing the speedway, it was located just behind it. The new coaster did cause the speedway’s track to be slightly shortened, but otherwise, no updates have been confirmed for the opening day attraction. According to industry insider Jim Hill, Disney was looking at replacing the low-budget attraction but reversed course after surveys showed many guests reported a strong emotional connection to the attraction.

Now that it's clear that the attraction will be staying, the focus has shifted a much-needed update and with it a possible sponsor. The last major update to the attraction came two decades ago.

With gas prices unlikely to go down and with the fumes from the attraction wafting throughout that entire corner of Tomorrowland, Disney has reportedly been looking at switching out the go-karts to electric ones, similar to those used at other attractions such as Andretti Indoor Karting & Games and I-Drive NASCAR, possibly themed to Tron. Disney previously used electric cars at the Hong Kong Disneyland Autopia before that version of the attraction closed in 2016. That same year the Disneyland version in California reopened with a new Honda sponsorship and updated cars that still relied on gas engines.

The irony of a gas-powered attraction that celebrates the future was immediately pointed out across the internet, with snide comments to be found not only in the comment section of Disney Park’s own blog but also in write-ups by Motor Trend, Auto Week and numerous other industry publications. It’s possible this pushback in early 2016 was what led Disney to review the future of the Florida attraction heading into 2017’s D23 Expo.
With Tron’s high-tech cloud-like building stretching toward the sky just behind the attraction, the juxtaposition of the extremely dated gas go-karts against the cutting-edge Tron attraction might be too harsh for even the most dedicated fans of the go-karts.

This seemingly sure bet on Disney eventually shifting to electric cars for the attraction led to a rumor of a new sponsorship making the rounds this past week: Tesla, known for its space-age designs and its impressive batteries, was rumored to be the next sponsor of the car attraction. After the rumor was picked up by numerous publications, Disney eventually responded to one fan’s questioning via the WDWToday Twitter account stating “Thank you for your sharing your interest in Tomorrowland. Please know this information is not true.”

Lance Hart of Screamscape has stated that the Tesla rumor might’ve been an intentional “leak.” Hart opines “the whole ‘leak’ of the story could have been on purpose as part of some kind of negotiation tactic between GM and Disney over a renewal of their sponsorship. Always best to negotiate from a position of power, and letting GM know that Tesla could be waiting in the next room to sign their own deal if GM balks is a pretty good incentive.”

GM is currently the “official vehicle company” of WDW thanks to a sponsorship that is tied to Epcot’s Test Track. Disney sponsorships are typically 10-year-long contracts, with the first taking place in 1999. When the renewal was up in 2009, GM was in the middle of a U.S. government-led bailout and was in no position to negotiate a decade-long sponsorship. According to Hart and other insiders, Disney recognized that the global recession meant they wouldn’t be able to get any type of long-term sponsorship, so instead they paused the negotiations. GM ultimately recommitted to the original sponsorship in 2012 when Disney announced the current version of Test Track.

What is unclear is whether the 2012 sponsorship kept the original dates for GM having its Chevrolet brand featured on the attraction. If so, that would mean the GM sponsorship would be ending this year. If not, the sponsorship will likely continue until 2022. Either way, a sponsorship with a different car company seems highly unlikely until the current GM sponsorship deal expires. That being said, Tesla does manufacture more than just cars; a Tesla battery or solar panel sponsorship is possible, though Tesla shuns traditional advertising so any such sponsorship would come as a bit of a surprise.

Maybe Tesla could skip the go-kart sponsorship and instead sponsor (and fix) the incredibly outdated, constantly breaking-down monorails. Despite steady negative press, Disney has yet to confirm that either attraction will receive any updates. Maybe we’re all just wishing upon the wrong star.