Florida girl tossed into the air by charging bison at Yellowstone 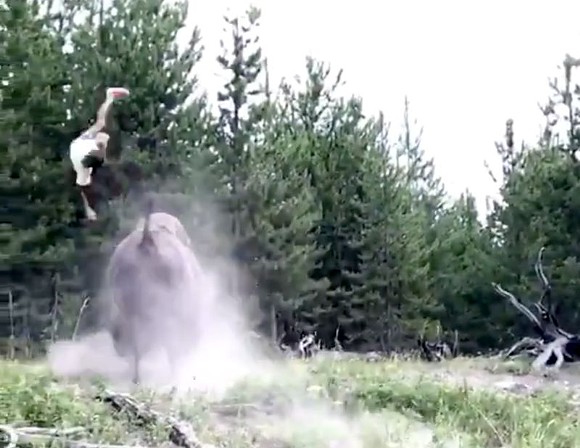 A 9-year-old girl from the Tampa area was tossed into the air Monday afternoon when a bison bull charged her at Yellowstone National Park.

The girl, from Odessa, was injured but has since been treated and released by park medical officials, according to the National Park Service.

Video of the incident went viral, first appearing in a tweet from Twitter user @haileyydayton. She later deleted the tweet, citing "cruel and inconsiderate comments that this young girl would most likely see."

Due to the abundance of cruel and inconsiderate comments that this young girl would most likely see, I am deleting the video of the Bison. This was meant to show awareness of what can happen when not properly respecting the life you are around. This behavior is unsat.

Video shows two people running away right before the incident. People can be heard screaming, with one person shouting, "Oh my God!" as the bison charges the girl while she tries to run away.

😳 Things escalated quickly when a bison spotted this 9-year-old girl at Yellowstone National Park. Luckily, she's OK! (Her parents are the ones running away in the background, according to the witness who shot this video.) https://t.co/xfieCv5iHj pic.twitter.com/Pei98hR6Rf

“According to witnesses, a group of approximately 50 people were within 5-10 feet of the bison for at least 20 minutes before eventually causing the bison to charge the group,” according to a statement from park officials.

They warned in a press release on the incident that visitors should stay 25 yards away from all “large animals,” including bison.

The girl was first taken to Old Faithful lodge for assessment and treatment before she was later taken to the park’s medical clinic, which has the same name, the NPS stated.

Officials are still investigating the incident and have not yet released any citations.