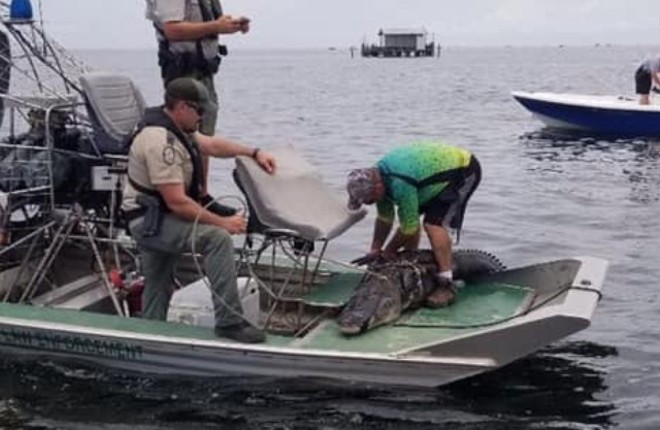 A massive alligator was removed from a popular swimming area in Pasco County after authorities say it was aggressively chasing people.

According to a Facebook post from the Pasco Sheriff's Office, a 15-foot gator was chasing swimmers in the Pithlachascotee River, near Durney Key last Saturday.

The gator was promptly reported to the Florida Fish and Wildlife Conservation Commission and captured with the help of a nuisance wildlife trapper and PSO Maritime Operations Deputies.


The Sheriff's Office says there were no injuries and the gator was transported to a “safe location” by the trapper. However, it’s worth mentioning that most “nuisance gators” in Florida are rarely relocated because they often try to return to their capture site. In other words, no one wants a 15-foot angry gator traveling through parking lots, backyards and swimming pools. So, in all likelihood, this beefy boy was “relocated” to a deep fryer.

According to the FWC, Florida currently has 1.3 million alligators in all 67 counties.