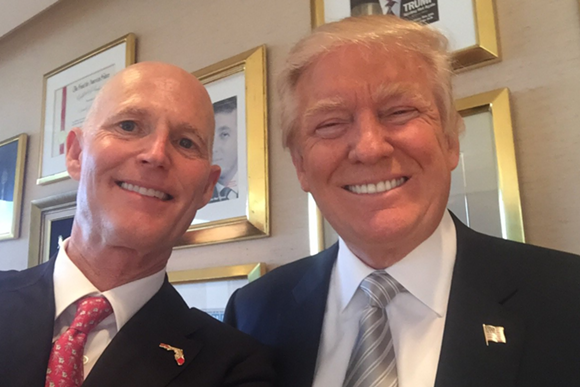 Host Chuck Todd asked Scott about President Trump's recent tweets attacking minority members of Congress with racist language.
On Saturday, Trump attacked Democratic Rep. Elijah Cummings by characterizing Cummings' Baltimore-area district, which is 55% black, as "a disgusting, rat and rodent-infested mess" and a "very dangerous & filthy place." He also called for four progressive congresswomen of color to "go back and help fix the totally broken and crime-infested places from which they came." All but one of those congresswomen, Rep. Ilhan Omar, was born in the United States – they just happen to have darker skin. Scott calmly attempted to justify the President's tweets by bringing up how  Rep. Cummings "attacked," in Scott's words, agents of Immigration and Customs Enforcement (ICE). "This reminds of what happened to soldiers coming back from Vietnam," Scott said. Scott stumbled and dodged Todd's follow-up question, asking whether or not that justified a "racial resentment" tweet from the President. The senator from Florida eventually chuckled and stated, "I didn't do the tweets, Chuck, I can't say why he did what he did." Scott said that he'll disagree with the President when he feels like he has to. In May, Scott voted in favor of more disaster relief money to Puerto Rico, which President Trump opposed. But that is just one small instance. According to FiveThirtyEight, Scott has voted in line with the President 88.9% of the time since he's come into the office. "I'm disappointed when people are out there attacking border patrol agents," Scott said to close out the interview. "I would like everybody to come together to work together — that's what I'm trying to do in my state. Right now, the country is divided because of a lot of things."

Scott also professed to have been in the dark about election hacking in 2016, but said that our adversaries try to affect our elections, a break from the position of the Trump administration that Russia's interference has no impact on the 2016 Presidental election.

"We have to understand that Russia, Iran, China, their going to try to impact our elections," Scott told NBC's Chuck Todd on Sunday, "We've got to be very diligent."

According to a report from the bipartisan Senate Intelligence Committee, two Florida counties, which were not named, had their electoral systems breached. Scott admitted that as of Sunday, he had not seen the report, as well as that he received no information on Russia's attempt to compromise Florida when he was governor during the 2016 elections.

Scott harped on his efforts as governor to aid Florida cybersecurity to supervisors of elections at the county level.

"Look, the Russians are here," Scott said as he made the point that all states should have similar measures. "They're going to try to get into our system."