Universal Orlando readies for 'major announcement.' This is what we think it will be. 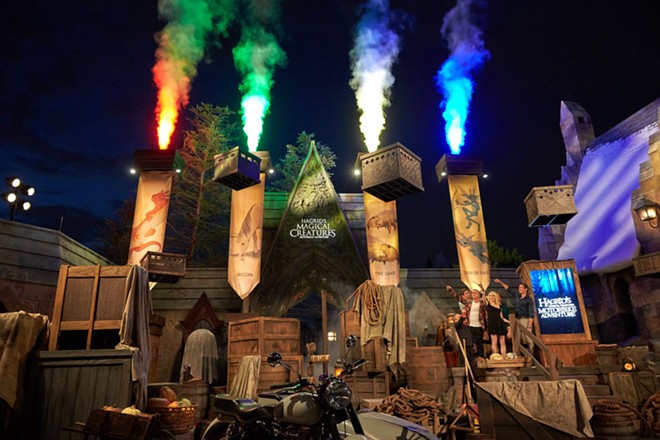 On Thursday morning, Universal Orlando will hold a press conference at the Orange County Convention Center for a “major announcement.” The announcement will take place just ahead of Disney’s D23 Expo in August, where their own major plans for WDW are expected to be confirmed.

While there are plenty of projects in the works at Universal Orlando, from a new coaster in the current Jurassic Park area to a stunt show that is rumored to have a Jason Bourne theme, the timing and odd location of the announcement has many speculating that the long-rumored, already under construction new theme park will finally be announced.

While Thursday’s special-guest-filled announcement event will more than likely finally give us official statements regarding Universal’s plans, there are already lots of details regarding the new theme park anchored south campus that has leaked out over the past few years.

Multiple hotels, a retail and entertainment complex, and possibly offices are expected to eventually be built on the site which was previously zoned for a larger multi-resort complex. Permits and construction have begun on the theme park that will anchor the campus that is visible from the Orange County Convention Center where Thursday’s event will take place. 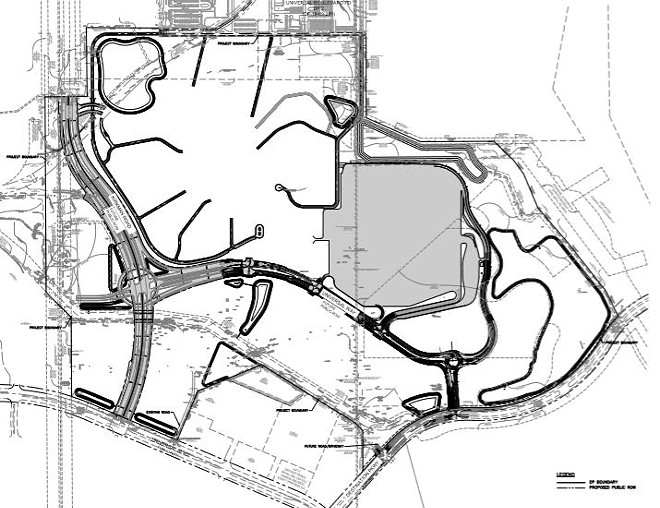 Public documents confirm a road network connecting Sand Lake Road to Universal Boulevard will have dedicated bus lanes and elevated limited access roundabouts along the new Universal Way. Kirkman Road will cut between the new park and Lockheed Martin’s property, connecting to Universal Boulevard. This, along with separate updates to Sand Lake Road, should help alleviate the current traffic woes that this area suffers. The new road network connects to a surface parking lot with just over 5,000 parking spaces spread over 107 acres. Just north of the parking area is where the new theme park will be located.

Rumored to be named "Fantastic Worlds" and Epic Universe, the new theme park will be a "best hits" presentation of NBC Universal’s intellectual properties. The previously mentioned public documents show an access road circling the new park and smaller ancillary access streets stretching towards the center of the park. This, along with supposed internal documents first leaked by Alicia Stella of Orlando Park Stop, which she states are from a Comcast internal townhall meeting, points to a hub and spoke design for the new park, like the Magic Kingdom or Animal Kingdom. This would be a departure from the more typical ‘racetrack’ style design found at Islands of Adventure and Universal’s international parks.

It’s unclear if the entrance retail street, the park’s “Main Street”-like corridor, will be behind the turnstiles. Josh Young, of Theme Park University, has been one of the leading sources for details regarding the new park. Young has stated that the central retail corridor won’t require admission tickets but guests moving between the different lands in the park will need to present their admission ticket, or linked biometrics, at each land’s entrance, which will be only accessible via the central corridor.

Inspired by Diagon Alley, each land will supposedly be accessible via a ‘portal’ that blocks visibility into the land. Some involved with the new project have off the record expressed concern regarding the park, with crowd flow being the most notable worry thanks in part to the portals and lack of access between the lands. Universal is supposedly looking at ways to rent out the individual lands for after-hours events. Theme park "lands," especially ones with unique themes like Diagon Alley and Pandora: The World of Avatar, can demand tens of thousands of dollars for a single evening’s private event. The location to the convention center would make the new park a desirable after-hours events venue.

While it’s unclear where the turnstiles will be, what is clear is the new park will bring some of the biggest franchises in entertainment to Orlando. Since the park itself has yet to be confirmed, the various intellectual properties within it have obviously yet to be confirmed as well.

Of all the properties, the most likely is Nintendo. Super Nintendo World has already been confirmed for Universal Orlando. Universal Studios Japan’s Super Nintendo World is well under construction, slated to open just ahead of next year’s Olympics. Both Universal Studios Hollywood and Singapore will also have versions of the land, though both of those parks will have a much smaller version than Japan or Orlando. The Orlando version was initially slated for Universal Studios Florida’s Kids Zone with multiple documents, images, and photos of a model of those plans leaked by various sources. By late 2017, construction walls were installed around Kids Zone, but demolition never began with the construction walls quietly coming down a few months later.

The assumed reasoning for this shift to the new park is because of the larger footprint it, giving Orlando what will be largest of all the Super Nintendo Worlds. A high-tech, indoor Mario Kart ride will be the flagship attraction for the new land, and possibly for the park. A Yoshi omnimover style indoor/outdoor dark ride, similar to the High in the Sky Seuss Trolley at Islands of Adventure, was previously planned for the land at Universal Studios Florida. It’s assumed it will be included in the updated Fantastic Worlds land as well. Along with a third ride, a coaster-like attraction themed to Donkey Kong.

Beyond the nearly guaranteed inclusion of Super Nintendo World, the new park will likely have some presence of DreamWorks. Early rumors pointed to a Fantasyland style section where multiple DreamWorks brands would co-exist. How to Train Your Dragon, Trolls, Kung-Fu Panda, Madagascar, and Shrek (based on the upcoming reboot) have all been floated as potential franchises to expect in the rumored DreamWorks land.

A similar Illumination Entertainment branded land has also been mentioned. This would include an expanded and updated Minions mini-land, nearly identical to one in development for the upcoming Universal Studios Beijing, and a Secret Life of Pets dark ride, like the one now under construction for Universal Studios Hollywood. A Sing based attraction would also likely be included in this land.
It’s thought that at least one of these two lands will ultimately be pulled from the new theme park and instead will go to Universal Studios Florida with Illuminations being the more likely of the two to end up back at the Studios.

Despite recent box office failures, Universal has been looking at ways to revive its Classic Monsters with a notable increase of unique in-park merchandise and even a massive mural on a studio wall in Hollywood. It’s thought that the merchandise was one of many tests the company was using to see how popular the Classic Monsters are with rumors pointing to a Classic Monsters land slated for the new park. In the previously mentioned documents leaked by Alicia Stella what looks to be Dracula’s Castle can be seen on one page discussing the park. Like all lands in the new park, this one would include at least one ride, more than likely an indoor dark ride of some type. This land would be one of the more budget conscience ones in the park and will be built to be easily replaced when a more popular franchise comes along.

A Star Trek-themed Tomorrowland-like area was rumored for the park, as was a Lord of the Rings themed area, but neither of those proposals looks to have been greenlit.

The last rumored franchise for the park is Harry Potter’s Fantastic Beasts. Disappointing box office sales have supposedly caused Universal to question how much they want to lean on the aging Potter franchise. While butterbeer is still one of the best selling items ever to be realized for a theme park, Universal has been looking closer at Disney’s move to only develop new attractions based on intellectual properties they own outright. This wouldn’t impact previous agreements, such as those with Nintendo and Sony, but may impact projects not as far into development. The relationship between Universal and Warner Brothers, who owns the movie rights to Potter that Universal uses, has cooled in recent years as Warner Brothers looks to develop its own attractions, including some in Los Angeles that would be in direct competition to Universal Studios Hollywood (not to mention the broader competition between the two parents companies; Comcast and AT&T). This shift in strategy has also caused some to speculate that we may finally see movement on the awkward Marvel agreement between Universal and Disney, though neither company has indicated that this is the case.

Beyond the rumored intellectual properties found in the new park there a few other essential rumors that may be announced on Thursday. At least one show is rumored for the park. Orlando may finally be getting the popular WaterWorld themed stunt show that is found at every other Universal resort. With the high prices they demand hotels with in-park views are becoming more common, both Disney and Universal have been rumored to be looking at how they could include such hotels to their parks in Orlando. This new park may be the first in Florida to have such a feature. The new hotel would overlook the park’s retail corridor and possible one or more lands within the park.

Fantastic Worlds, or whatever the park may eventually be named, is expected to open in the early to mid-2020s.

Despite plenty of speculation, for now, we don’t know much regarding the new park beyond its size and most basic layout elements. Universal’s press announcement will take place at 10 A.M. on Thursday and will last approximately 20 minutes with a short Q&A afterward. The press event is closed to the public. 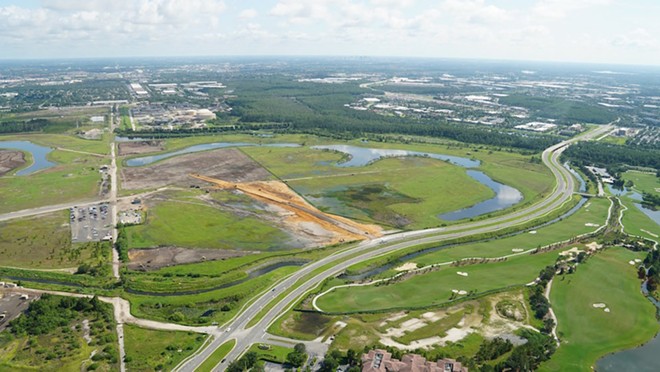