As hurricane season hits its stride, one of the two current tropical disturbances in the Atlantic now has a 60 percent chance of forming into a tropical depression over the weekend, according to the National Hurricane Center.

The tropical wave is currently located several hundred miles southwest of the Cabo Verde Islands, splashing the tropics with clouds and rain as it creeps westward at about 15 miles per hour.

Within the next five days, there is a 60 percent chance that favorable winds will whip the wave up into a tropical depression. If it does become the third named storm of the season, it will be dubbed “Chantal.” 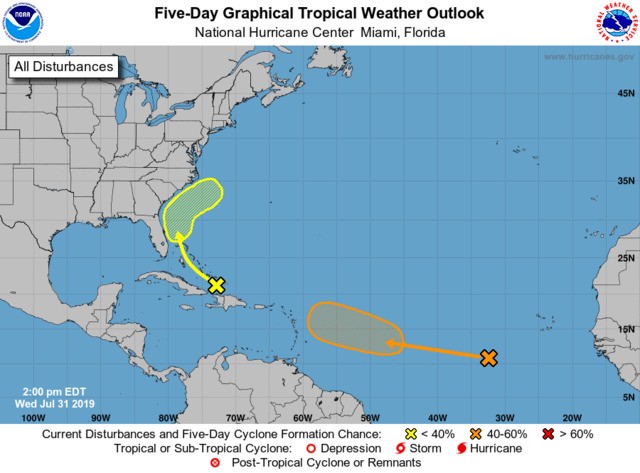 This is a significant increase from an earlier Wednesday report that stated the system had a 50 percent chance of developing.

“Environmental conditions are forecast to become more conducive for development over the weekend and a tropical depression could form by early next week several hundred miles east of the Lesser Antilles,” the NHS report states.

The other Atlantic disturbance, a series of disorganized showers and thunderstorms stretching from Puerto Rico to the southeastern Bahamas, presents a significantly lower threat. The NHC states that this tropical wave presents a 10 percent chance of forming a disturbance in the next five days, but it could dump some rain on the Sunshine State if it continues its northeastward path.

Tropical depressions sit just below tropical storms on the scale of wind speed, maxing out at 38 miles per hour before they get bumped up to tropical storm status.