Gabby’s World is the newest guise of New York musician Gabrielle Smith, the mind also behind Eskimeaux and Ó. And this recent concert presented by Ugly Orange was the band’s Orlando debut.

Although – or perhaps because – Smith has covered considerable sonic ground before arriving at this current pop sound, Gabby’s World has a wide, versicolor indie horizon that’s much easier to feel than to tidily encapsulate in description.

With a high-functioning four-player band that includes Bellows leader and fellow Epoch member Oliver Kalb, that spectrum was stroked with vivid definition and fidelity. It was a luminous performance that underscored how naturally Smith is wearing her latest pop skin.

And her local moment of the night was when she gave an onstage shout-out to OW music contributor Ida V. Eskamani, who was in attendance and had interviewed Smith for a preview feature story.

Though this was the Orlando premiere of Gabby’s World, Gabrielle Smith has performed in the City Beautiful before. A couple years ago, it was a part of Bellows, who were now opening up for her.

Like Gabby’s World, Bellows is primarily the vehicle for a single musician, the aforementioned Oliver Kalb. From bedroom beginnings, Bellows has sprouted big indie-pop wings. With the same cast of players as Gabby’s World, this band rendered Bellows’ lovely, unbridled pop spirit with elegance and anthemic scale.

Kalb’s local moment was his recounting of an exchange he witnessed at one of their previous Orlando shows where the Will’s Pub door guy either bravely or ignorantly denied a member of the Warlocks biker gang who was determined to avoid the cover charge. 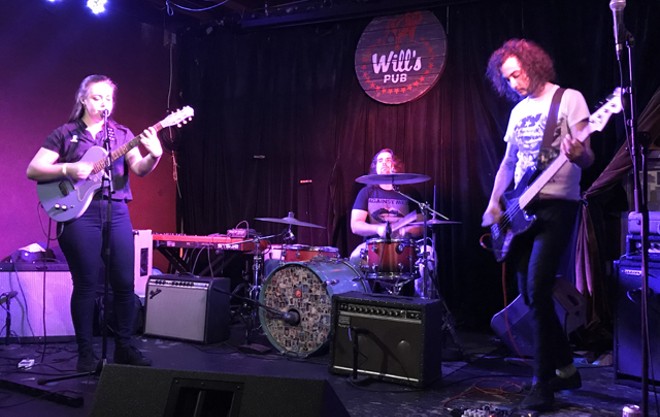 Opening the night was reliably upward Orlando band TV Dinner, whom I’m going to officially stop referring to as “twee pop” because they’re now much more than the act they started out as. Between their crystallization as a group and the blossoming of singer-guitarist Julia Joyce, who has really benefited from the sharpening she’s been doing solo as Julee Bruise, they’re an indie-rock unit of more incision, efficiency and substance than ever.

TV Dinner aren’t simply pleasant anymore. Both emotionally and sonically, their complexion is deeper now. They cut, and they bleed. And they’ve been one of the more impressive local evolutions in recent years.