Have you ever followed downtown detour signs, only to end up driving
in a giant circle? Now, imagine doing that in a storm. That’s what this weekend is going to be like in downtown Orlando.

Colonial Drive under the I-4 bridge will be closed all weekend, and meteorologists are predicting scattered showers and thunderstorms to last through Sunday night. In other words, it's time to get out of town.

Colonial Drive under I-4 will close at 10 p.m. Friday and reopen by 5 p.m. Monday, according to the Florida Department of Transportation. 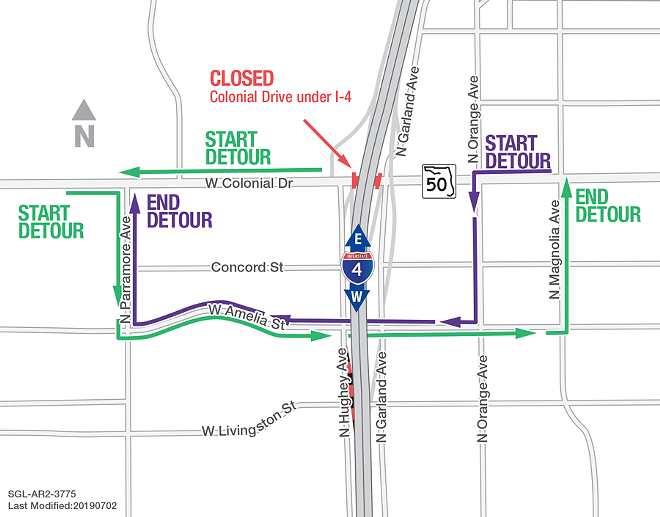 The road closure is part of nearly three weeks of nightly closures in order for crews to safely demolish old westbound travel lanes. Mondays through Thursdays, the road will be closed nightly from 10 p.m. to 5 a.m. Colonial Drive will also be closed entirely under I-4 next weekend from 10 p.m. Friday to 5 a.m. Monday.

The closures could possibly be extended due to weather delays, so naturally, the National Oceanic and Atmospheric Administration is predicting scattered thunderstorms and showers throughout the weekend starting at a 90 percent chance Friday and dropping to a 50 percent chance by Sunday night.

The NOAA also reports hazardous weather conditions for East Central Florida this weekend, including storms with "dangerous lightning strikes," gusty winds and heavy rainfall that could result in minor flooding of roadways.

You may want to stay away from the beach this weekend too, because NOAA reports a moderate risk of rip currents in East Central Florida beaches and wind gusts up to 35 knots.

This weekend may be a good time to catch up on Netflix and binge the latest season of Queer Eye.