FuelRod stations expand throughout Central Florida, but the honeymoon may soon be over

Now with a presence at every major theme park in Orlando, FuelRod has turned its sights to the region’s airports. The reusable, swappable power bank battery chargers have quickly taken the tourism industry by storm since first being introduced at the San Diego International Airport in 2014.

The small power banks allow for users to easily swap out depleted ones at kiosks for fully charged ones or users can charge the power banks on their own. Tricopian, Inc., the parent company of FuelRod has announced Orlando Sanford International Airport (SFB) as their latest location.


"As a gateway to popular Orlando theme parks where our FuelRod service is already deployed, we're excited to add Orlando Sanford International airport to our growing network of kiosks," said Tricopian co-founder, Joe Yeagley. "People love the service and the ability to charge their mobile devices on the go. Known as the theme park capital of the world, visitors can land at SFB, quickly purchase a FuelRod from one of our kiosks and be ready to capture and share all of the fun moments and activities that Orlando offers."

This is the first airport in Central Florida to feature FuelRod kiosks, but they can be found across the region including at the Daytona Beach Ocean Center, WonderWorks, ICON Park (formerly I-Drive 360), SeaWorld, Busch Gardens, Universal Orlando, and Disney World.

Previously, the swaps were free but more recently certain locations, including those at Universal Orlando, have begun charging for the exchanges. In announcing the SFB location, the company stated, “users can quickly swap the used FuelRod for a fully recharged battery for a modest fee at any SwapBox kiosk anywhere within the global network.” 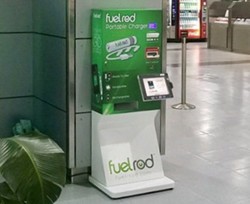 The initial power bank rods themselves can cost up to $30, well above the price of a similar rechargeable power banks (1450 mAh to 2600 mAh). The thing that attracted many theme park goers and frequent flyers to FuelRod was the convenience of the free swaps.

FuelRod has stated that host locations determine the swap pricing. On its Facebook page, the company explained; “swaps have been used so much we've had to start charging at some locations to cover more frequent service requirements after 4+yrs at the same price.” The company also reminded those complaining about the new fee that they can charge the power bank rods via USB.

With some locations now charging for the once free swaps and with the high priced, low capacity power banks, some have questioned the long-term sustainability of the company. But for now, the company doesn’t look to be slowing down. A new Orlando based operations center was recently opened to help the company’s expansion throughout the region.