The Velocicoaster might be Orlando's next big thrill ride 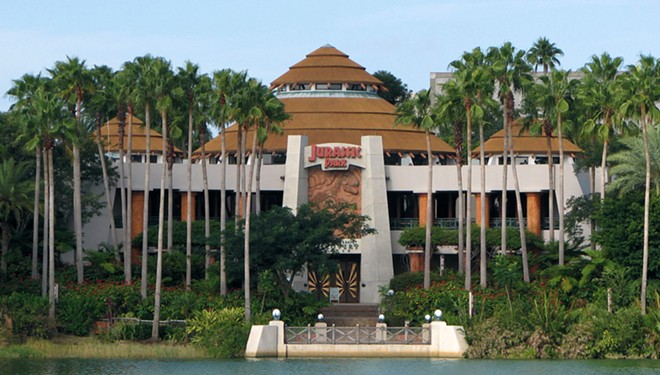 Last week's Epic Universe announcement by Universal Orlando was impressive, but rumors point to it having been planned as an even larger unveiling, thanks in part to a slew of upcoming attractions at the existing resorts.

Multiple sources have privately stated that the original plan for the August 1 announcement was to focus on new projects headed to the current resort, then finish off the press event with a "one more thing" style announcement regarding the new south campus plans.

Originally to be included in the announcement were a new stunt show rumored for Universal Studios Florida, new attractions for Volcano Bay, more details on the upcoming Phase 2 of the Endless Summer resort, and new offerings for CityWalk. The already-under-construction coaster in the Jurassic Park area of Islands of Adventure was also to be included.

Ahead of the press event, Universal even teased the new roller coaster announcement on Instagram with a photo of dinosaur eggs captioned "Something is hatching... 👀."

Apparently, the press event was scaled back to focus exclusively on the new park. It's unclear why the other announcements were withheld, but it's thought that they will be released over the next few months as Disney rolls out multiple new offerings and announcements of its own.

Despite the lack of any official announcement, a trademark application filed on July 24 points to a potential name for the new coaster" "VELOCICOASTER," for use "in the nature of an amusement park ride." The name aligns with rumors that the coaster will be themed to the velociraptors that were popular in the Jurassic World set of films.

Known internally as Project 791, the new coaster will dramatically alter the skyline of Islands of Adventure. Located on the site of the long-closed Triceratops Encounter attraction and along the waterfront near the Discovery Center, site clearing has already begun.

It's rumored that the Discovery Center may also receive a major update ahead of the new coaster's opening. Based as a tour of the raptor paddocks, guests will board the high thrills coaster then move into one of two show scenes on the ride before being launched into what is known by coaster fans as a ‘spaghetti bowl' with multiple twists, turns, inversions, and other elements all within a small area. The ‘bowl' will be made even more intense with rockwork and water features. A top hat element, a steep hill that a coaster nearly stalls out on as it crests over, will make the coaster a new focal point for Islands of Adventure. After leaving the ‘bowl,’ the coaster hits another launch element where it will race along the waterfront and through the canal area between Jurassic Park and Hogsmeade before making a U-turn, passing once again along the waterfront, through the last show scene, and then returning to the station. The coaster may reach a top speed in excess of 70 mph.

Universal Studios Hollywood's Jurassic Park shoot-the-chute flume ride was recently overhauled and rethemed to Jurassic World. Early reviews point the updated Hollywood version of the ride being a hit. Universal has yet to indicate if the Orlando version of the water ride will be re-themed, but Universal officials have not denied the possibility.

The VELOCICOASTER is expected to open in early 2021.