German water slide design firm Wiegand.waterrides GmbH are known for their groundbreaking designs, including the wild Slidewheel. Now the company is making waves with a new concept, developed in partnership with Up and Down Engineering, billed as the "world's first hybrid roller coaster and waterslide."

The Slide Coaster provides a launch start that replaces the need for lift hills or boarding stations located at the top of tall towers. Staircases are one of the biggest complaints water parks face, with abundant creative workarounds like Blizzard Beach's ski lifts, to water elevators, to water coasters that use jets to push riders uphill.
Pitched as a dueling slide, Wiegand states that the concept has an hourly capacity of 720 riders. There are a number of safety concerns still surrounding the idea, the first being it simply looks terrifying.

Wiegand has only shared computer renderings of the concept, far from being realized, but the Slide Coaster does present a unique solution to the problem of lift hills and staircases. 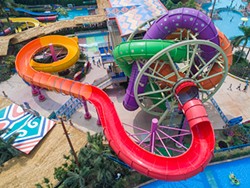 This new concept is similar to the water coasters, but instead of relying on water jets or lift hills via belts the Slide Coaster has a roller coaster-like track that runs parallel to the water slide. The specially designed rafts seat two guests each and have a large wedge behind the rear seat. A sled trolley on the roller coaster track has an arm that lowers and uses the wedge to push the raft forward up to speeds of more than 39 miles per hour. 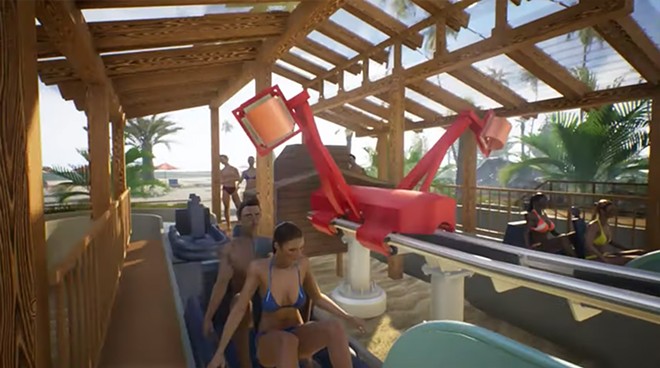 No potential locations for the new concept have yet to be shared. Like many possible rides, this looks like one likely piece of a larger concept that can make water rides more thrilling while making them more accessible by removing the large towers many now feature.

As with many ideas, more details on this concept should be shared closer to the IAAPA Expo, the attractions industry's signature annual convention, this November. We will bring you the details if we hear about a future location.