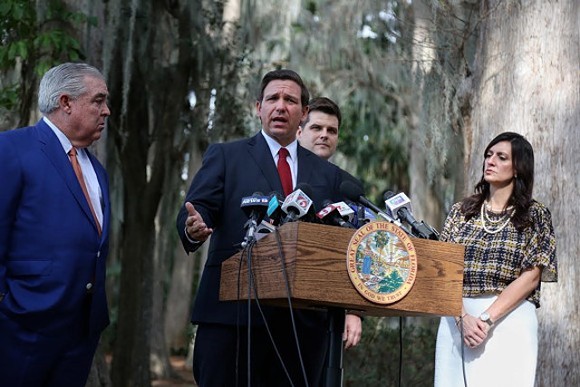 Gov. Ron DeSantis pointed to “recesses of the internet” where people can share “vile” views and a need to look at white nationalism – along with other causes – when asked Wednesday about tackling mass violence.

But he also said, after a Purple Heart dedication ceremony at Tallahassee National Cemetery, that it’s not productive to any gun-safety dialogue to focus on partisan politics, as Democrats continued to criticize President Donald Trump after two mass shootings over the weekend.

“I have no interest in being part of people’s political narratives. I understand the narratives. I’ve seen it for years and years,” said DeSantis, an ally of the president. “I’m trying to focus on solutions, and that’s why we’ve been forward looking on our threat assessment strategy.”

Trump is facing accusations that his immigration rhetoric inspired a man who posted warnings online of a “Hispanic invasion” before killing 22 people at an El Paso, Texas, Walmart on Saturday. A separate mass shooting in Dayton, Ohio, on Sunday, left 10 people dead, including the shooter, who had opposed Trump in online postings. The FBI has said the man may have been motivated by “violent ideologies.”

DeSantis’ comments Wednesday came as state Sen. Annette Taddeo, D-Miami, called for him and Attorney General Ashley Moody to repudiate “the rhetoric of hate spewing from the White House.”

“DeSantis continues his failure to criticize Trump’s relentless attacks on immigrants, such as during Trump’s campaign appearance in the Florida Panhandle in May when a supporter responded, ‘shoot them,’ in reply to Trump’s question over how to stop border crossings,” Taddeo said in a prepared statement. “Like many of his fellow Republicans, DeSantis avoids addressing Trump's hateful rhetoric when weighing in on what to do in response to these ongoing tragedies.”

Taddeo also criticized Moody’s recent request that the Florida Supreme Court block a proposed constitutional amendment that would prevent possession of assault weapons and the state’s pending appeal of a circuit judge’s ruling that struck down a law threatening tough penalties for local officials and governments that approve gun regulations.

Moody spokeswoman Lauren Schenone did not address Taddeo’s charges when responding to a request for comment. Instead, Schenone said Moody made the filings to carry out her obligations under Florida law.

DeSantis said delving into every word said by a politician as a way to find fault for a mass shooting only makes it harder to have discussions about preventive measures. While Democrats have focused on Trump’s rhetoric, DeSantis, a former congressman, brought up a 2017 incident in which an activist who had worked on Democratic presidential candidate Bernie Sanders’ 2016 campaign shot four people, including Louisiana Congressman Steve Scalise, during a GOP congressional baseball team practice.

“Absent of someone saying, ‘Hey, go do this,’ to try to cherry pick someone saying one thing and saying this led to that, I don’t think that’s productive,” DeSantis said. “That’s why I never blamed Bernie for (the) shooting (at) our baseball (practice), because as much as I disagree with what he (Sanders) says, what that individual did was not justifiable, and there was nothing that was said that would justify you doing that.”

The El Paso and Dayton shootings could help fuel debate in Tallahassee about gun-control issues and ideas for preventing mass violence.

Senate President Bill Galvano, R-Bradenton, on Monday directed Senate Infrastructure and Security Chairman Tom Lee, R-Thonotosassa, to lead efforts to determine if any further action is needed after laws were enacted in the wake of the Feb. 14, 2018 massacre at Marjory Stoneman Douglas High School in Parkland.

Part of the 2018 law, which raised the minimum age from 18 to 21 and required a three-day waiting period for purchasing rifles and other long guns, established what is known as the “red flag” law, which allows law enforcement agencies to seize firearms from people they believe may pose a threat to themselves or others.

DeSantis said that while it may still be too early to determine the impact of the mental-health aspects of the 2018 law —- about 1,600 orders have been issued —- he supports a proactive approach by law enforcement.

“You have the guy in El Paso, which obviously that was like an ethno-nationalist motivation. Obviously, the Pulse nightclub (mass shooting in Orlando in 2017) was militant Islam. And then you have some people who are just crazy, there’s not necessarily a clear motivation,” DeSantis said. “I think you have to be familiar with all of those types of threats and have the warning signs identified and then do something about it.”

Another area he said needs to be addressed, even though the government is limited in what it can do, is the internet.

“You have these recesses of the internet where people who may not have a lot of common compatriots where they live, now they can all congregate in this community online and spread a lot of the vile stuff,” DeSantis said.