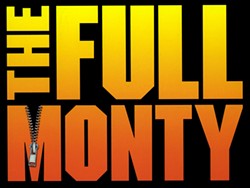 The Full Monty, that heartwarming 1997 British film about unemployed blue-collar schlubs who become male strippers, made its way across the pond as a 2000 Broadway musical, and now the boys from Buffalo are baring all at Orlando’s Abbey. But while this production has the impressive members needed to go all the way, it ends up being mostly a cock tease.

With a 17-person cast, director Kenny Howard has crammed a ton of top local talent onto the tiny Abbey stage, with Kincade and Rivera the breakout stars among the primary roles. Even the supporting parts are populated with delightful surprises, from Rebecca Fisher’s ballroom-dancing diva to Wendy Starkland as a chain-smoking showbiz vet. One exception is McMahon, who has a strong singing voice and sharp comic timing, but never manages to make Jerry seem like more than a smarmy, swaggering slacker.

Likewise, while Howard’s direction keeps the tempo ticking (aided by scenic designer Eric Desonoyers’ efficient industrial set), it doesn’t always take time to dig into the more emotional moments, so we never engage with the characters below a surface level. On the plus side, choreographer Blue Star succeeds in the Herculean task of making her crew of decided non-dancers look competent (if not entirely confident) while executing their basketball-inspired steps.

This production’s best off-stage asset is the tight five-piece band led by music director Ward Ferguson, which makes David Yazbek’s jazzy score sound better than I remembered from the Broadway tour. The songs are almost peppy enough to distract you from how badly the book by Tony-winner Terrence McNally has dated in two decades, with nonstop casual misogyny and tired gender stereotypes generating most of the comedic grist. Even if you can set that aside and go with the goofy flow – a few drinks at the bar might help – there’s no escaping that while the play promises the actors will show “the full monty” (British slang that equates to "the whole nine yards" or "the works") it just builds up to a big bait-and-switch.