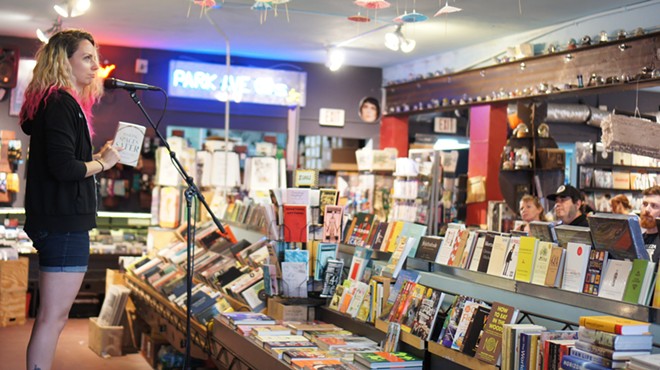 This wasn’t a concert, and this isn’t a concert review. But it had everything to do with the experience and politics of going to concerts and just being in a social scene in general.

It was a featured in-store appearance by Shawna Potter. Yes, she’s the unfuckwithable vocalist of incendiary feminist hardcore band War on Women, but she wouldn’t sing a note until well after this special engagement when her band opened for Baroness right down the road at the Plaza Live. That’s because Potter doesn’t simply sing the song, she walks the walk as an activist and now drops the knowledge as an author. And this was about her new book, Making Spaces Safer, on AK Press.

Actually, let’s dispense with the implied self-promotional edge in that. This was neither framed nor conducted to celebrate the rock-star author or her turns of phrase. The focus was squarely on the concepts and techniques within this timely how-to book on improving our social spaces.

Rather than a conventional reading, the event was part audience talk and part workshop. Unlike her full-frontal attack in song and on stage, this was an approachable, plainspoken and personal imparting of some awakening and empowering information. In Potter’s necessary street gospel, there aren’t simply inspirational messages of solidarity for marginalized people but actual practical methods to make our social places more inclusive and safer for everybody. Topics covered included tactics for subjects and witnesses of harassment alike, simple on-scene maneuvers for a range of personal comfort levels that provide immediate relief and agency in problematic situations. There were even blunt tips on how not to unwittingly become that asshole. And much of it was grounded by recollections of her real-life safe space-making experiences with programs in her native Baltimore and traveling workshops on the Warped Tour.

Our scene isn’t ignorant of these current concerns. Just look at the resolute and righteous message emblazoned on the very front door of Will’s Pub, which puts it straight:

But the enlightenment is far from universal. So if Shawna Potter comes to town for a book stop, go. Your scene will be better for it.