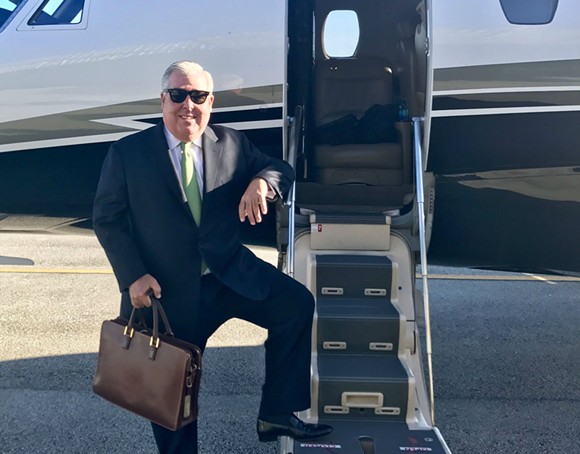 An im-por-dant announcement. Orlando attorney and self-proclaimed "Pot Daddy" John Morgan continues to put his money behind a proposed constitutional amendment that would gradually raise Florida’s minimum wage to $15 an hour.

The Morgan Firm P.A. contributed nearly $1.075 million last month to the political committee Florida For A Fair Wage, which is trying to get the amendment on the November 2020 ballot, according to a newly filed finance report.

The Morgan Firm P.A. and Morgan & Morgan P.A. have contributed almost all of the $4.154 million raised by the committee, which is chaired by Morgan.

Orlando attorney John Morgan's firm still relies on cheap labor despite pushing for $15 minimum wage in Florida
By Colin Wolf
Blogs
The state’s minimum wage this year is $8.46 an hour. To take the issue to voters, Florida For A Fair Wage needs to get state Supreme Court approval of the proposed ballot wording and needs to submit at least 766,200 petition signatures to the state.

As of Monday afternoon, the state had received 510,890 signatures, according to the Florida Division of Elections website. Florida For A Fair Wage spent nearly $947,000 in July, with virtually all of the money going to petition-related expenses.