It’s nearly a sure bet that Walt Disney World’s 50th Anniversary celebration will be discussed at the D23 Expo next weekend, but Disney is expected to share the details of dozens of other projects as well. The next five years will be one of the most significant investment periods in Disney parks and resorts in decades.

Confirmed at the last D23 Expo in 2017, three new Disney Cruise Line ships will come online between 2021 and 2023. A basic rendering showing the three liners was shared at that time, but no other details were announced.

It’s thought that the new ships may be named Wish, Enchantment and Imagination. Public documents from Port Canaveral refer to the vessels as “Triton,” thought to be a new slightly larger class of ships for DCL, but each will hold 1,250 staterooms, the same number as the Disney Fantasy and Disney Dream liners.

No itinerary has been shared, but it is expected that DCL will move one or more ships to the quickly growing Asia cruise market, possibly including stops at the Hong Kong Disneyland and Tokyo Disneyland resorts. The previously mentioned Port Canaveral documents confirm that at least two of the Triton class ships will call Central Florida home, where an update to the DCL terminal is in the works.

It’s expected that these ships will also stop at Lighthouse Point, the new Disney-owned Bahamas port of call on the island of Eleuthera, roughly 80 miles to the east of Nassau. Similar to their exclusive island, Castaway Cay, the 751-acre Lighthouse Point peninsula will feature multiple activities for cruise guests. It’s likely that some acknowledgment of Lighthouse Point and its offerings will be made at D23, possibly linked to the secret project that will be announced the day before the expo.

Disney recently published a survey asking fans about interest in various locations for possible Disney Vacation Club stays. Many of the areas mentioned are sites of current DVC or partner resorts, but one spot on the survey that currently has neither is Lighthouse Point.

The addition of this yet-to-open Disney Cruise Line location has led to speculation that an Aulani-style DVC resort might be in the works for the Bahamas. The $800-million, 841-room Aulani DVC resort in Oahu, Hawaii, is the largest stand-alone Disney resort in the world. At the time of its opening, it was viewed as a test for Disney to see if other stand-alone resorts of its scale could be successful.

So far Disney has yet to move forward on any more such resort. Smaller stand-alone DVC resorts that opened ahead of Aulani can be found in Vero Beach and Hilton Head. But nothing of the scale of Aulani, which has nearly eight times the number of rooms of Disney's Hilton Head resort, can be found away from a Disney theme park-anchored property.

Also in that recent DVC survey were four ski resort locations. DVC members can use their points at partner resorts, including a number of ski resorts: three at Lake Tahoe and one in Colorado. The survey mentions Lake Tahoe, two ski locations in Colorado and an undisclosed location in New Hampshire.

The idea of a Disney-branded ski resort dates back to Walt Disney himself, who worked on a project known as the Mineral King resort. While that Disney-branded Sequoia National Park ski lodge project was never realized, one of the concepts designed for it was: the Country Bear Jamboree. As Disney shifts to targeting wealthy customers more and more, a Disney-branded ski lodge might be a smart move to introduce those who are less likely to visit a theme park to the Disney brand.

There is at least one upcoming DVC resort that will surely be mentioned at D23. Announced last fall, Reflections: A Disney Lakeside Lodge will be the 11th DVC resort for WDW, after Disney's Riviera Resort opens later this year.

Reflections will have various accommodations, including bungalows like those found at the Polynesian and Wilderness Lodge resorts. A lazy river-anchored pool complex and easy access to Fort Wilderness will help make Reflections a go-to for those seeking to unwind. Sitting out over Bay Lake is a restaurant that will provide impressive evening views. Much of what we currently know regarding Reflections, including the existence of the restaurant and bungalows, is due to publicly available government documents. Disney should provide more information regarding Reflections at D23, but the resort won’t open until 2022, so some Disney may hold off on some details until 2021.

Disney World isn’t the only Disney resort with new hotels in the works. In Tokyo, a further expansion of Tokyo DisneySea will add attractions themed to Peter Pan, Tangled and Frozen along with a new hotel that will overlook the land. The $2.3 billion project will include four attractions, three restaurants, a retail store and the hotel.

A Frozen land is also in the works for Walt Disney Studios Park in Paris, as part of a $2.5 billion expansion of that park. The development will also include a miniature version of the Star Wars lands that opened this year in WDW and Disneyland, and a central lake where fountain shows will take place. Nearby, an existing section of the park will be re-themed to various Marvel brands. Disneyland Paris’ Hotel New York will be partly re-themed to Marvel as well.

Disney is going all-in on Marvel with themed lands also in the works for Disneyland Hong Kong (taking over that park’s Tomorrowland) and Disney California Adventure. Hong Kong Disneyland is also getting its own Frozen -themed land and a completely new castle, a first for any Disney park. 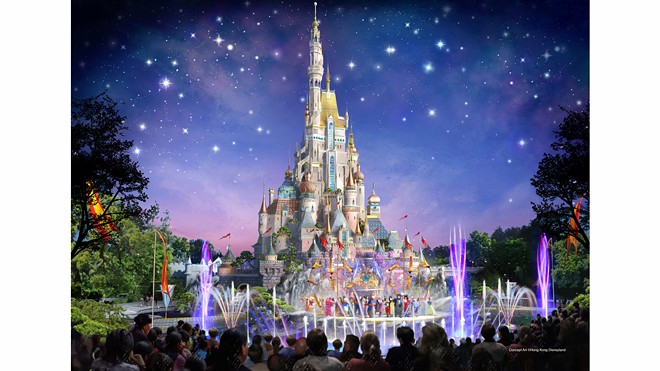 These Marvel and Frozen lands will undoubtedly be mentioned at D23 – the Disney California Adventure version is expected to be the primary focus of the Expo, which takes place nearby at the Anaheim Convention Center. The D23 website confirmed that a floor exhibit at the Expo will provide new details on the Marvel lands heading to California, Paris and Hong Kong. That same exhibit will also give us some of the first specific details on Epcot’s transformation.

A new play-themed pavilion, updated entrance plaza, and two new rides have already been announced for Epcot but many other details of the multi-year transformation are expected to be discussed. A whole new hub that will replace the Innoventions buildings is now in the works, with most of the buildings in that area closing in the weeks following D23. At the last D23 Expo, in 2017, a (now believed to be outdated) piece of concept art showing a drastically different Future World was briefly shared.

Significant updates to attractions in the Land, Canada, China and France pavilions have also already been announced. Smaller updates, such as the film seen on the Living With the Land boat ride, have been silently updated in recent weeks.

Major updates ranging from a new country joining World Showcase to a new hotel have all been rumored as part of Epcot’s redo, but it is unclear whether any of those projects, which are still years away and possibly no longer even happening, will be announced at this year’s expo. If these projects are happening, confirmation may be held back until the next Expo in 2021. That Expo may also be the first to take place in Orlando.

The post-Star Wars Phase 3 plans for Hollywood Studios may also be held back until the next Expo to ensure WDW doesn’t see the same type of disappointing low attendance that the Star Wars land in Disneyland saw earlier this year. Phase 3 is thought to be Pixar-based, with at least one major new land, possibly themed to The Incredibles or Monsters, Inc. heading to the park.

The previously announced live action role playing game-based Star Wars-themed hotel that will be built next to Hollywood Studios will surely be mentioned at the event, but with a recent Star Wars film and now the land missing expectations, the rumored rollout of the hotel at other Disney resorts now looks far less likely.

A rumored update to Animal Kingdom’s Dinoland area and a new nighttime show are both expected in the coming years, though it’s unclear if either will be announced at the expo.

Some have speculated that a fifth park (or seventh, if you use Universal's new math) for WDW may also be announced, but so far there has been nothing to indicate that this rumor is anything more than wishful thinking.

Much of the focus at the Magic Kingdom will be on the 50th anniversary in 2021, but there are already rumors of post-2021 plans for the park. A small expansion plot behind the Jungle Cruise, where a Moana-themed coaster was once rumored, is supposedly now being looked at for the location of an ultra-exclusive boutique hotel. The hotel would, for the most part, not be visible from inside the park but would provide incredible views into both the park and over the Seven Seas Lagoon. It would have direct access into the park and would offer at least one fine dining establishment. Currently, the concept seems to be nothing more than a blue-sky feasibility study, but with the insane prices rooms at the hotel could demand, it wouldn’t be surprising to see Disney move ahead with the project.