In what might be the ‘coolest’ use of a drone yet, Legoland Windsor recently tested ice cream delivery via drones. A small basket that holds the packaged ice cream snacks hangs below the Ice Cream Cone Drone with a camera on the bottom of the drone overlooking the basket.

Guests order their ice cream via an app that shares their location. After an employee loads up the basket with their order, the guest signals the drone via the flashlight on their cell phone. A contactless debit or credit card is required for the transaction with guests tapping their card on a card reader located inside the drone’s delivery basket.

The trial required guests to be in one of several delivery spots spread across the resort.

Officials stated that the trial went well and are now reviewing to see if the drone delivery service will be rolled out across the Legoland Windsor resort, pointing out that the delivery service means more time for guests to focus on having fun instead of standing in line. “We want families visiting the LEGOLAND Windsor Resort to spend every minute of their visit having the times of their lives enjoying our attractions. There is nothing better on a hot summer’s day than a lovely cooling ice cream and our revolutionary ice cream cone drone will ensure that our guests can keep having fun without having to stop and get an ice cream.” 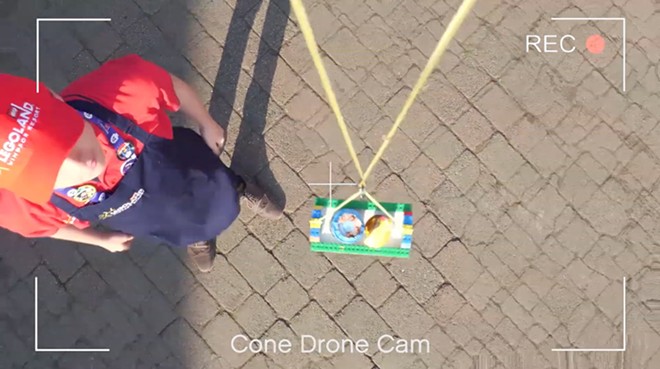 This isn’t the first ice cream drone delivery service for the United Kingdom. A similar pilot program took place in 2016 at a public beach in Lincolnshire. At the time of those trials, the Chief Operator of the drone company involved in the trials, Kurnia Aerial Photography, pointed to more drone deliveries in the coming years. “Many companies are looking at deliveries by Drone. We need to keep at the forefront of the industry and try to lead rather than follow. The Drone being used in the tests has been modified to include some of the latest safety measures available and, if we’re happy the tests have been successful, a safety case application will be submitted to the Civil Aviation Authority (CAA) in order to obtain the necessary permissions.”

Both Disney and Universal have filed patents for using drones in their parks with the majority of those patents focused on special effects. Disney World debuted drones at the resort in 2016 when it used Intel’s Shooting Star drones for a holiday show at Disney Springs. Those LED-equipped drones were also used as part of the opening ceremony in last year’s Winter Olympics.

Legoland Florida is aware of the tests at their sister park but so far have no plans for drones to be used here. "We are always looking for innovative ways to make our guest’s experience awesome and memorable. At this time, we do not have plans to incorporate the drone ice cream delivery in the theme park."

Legoland Florida may be basing their decision on temperature, as today's high in Windsor, U.K., was 64 degrees, compared to 90 degrees in Winter Haven.

Amazon tested its first drone delivery in 2016 but have yet to roll out drones for regular delivery use. Domino’s Pizza, USPS, and others have all been looking into delivery drones as well. For now, no Central Florida theme park offers deliveries via drones.