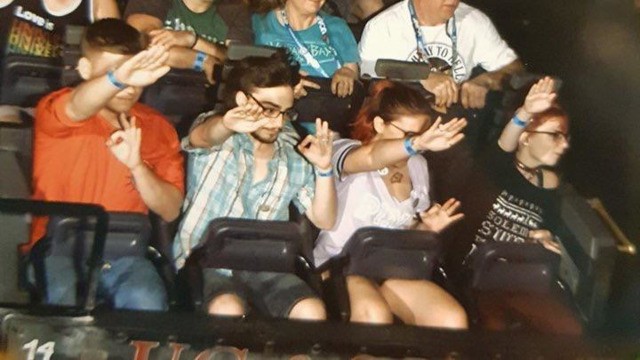 The photo, which was reportedly taken during Universal's Passholder Appreciation Night on Sunday, Aug. 18, shows four guests on the Revenge of the Mummy attraction making the racist hand gestures.

Despite being removed, the photo has since been shared across various social media channels.

"Hate has no place here — and we have no tolerance for any display of hatred within our destination,” said a Universal spokesperson to Spectrum News 13.

“We stand for diversity, inclusion and respect. Any guest using hate speech or displaying hate symbols will be immediately removed from our destination and not allowed to return."

It’s unclear who exactly posted the photo to the theme park’s Facebook page.

Of course the "OK" hand gesture isn't always a symbol for white power, but according to the Southern Poverty Law Center, it's all about context.

"The problem, of course, is that there are white nationalists, neo-Nazis and Klansmen who have increasingly begun using the use of the symbol both to signal their presence to the like-minded, as well as to identify potentially sympathetic recruits among young trolling artists flashing it. To them, the configuration means WP, for “white power,” says the SLPC.

Either way, Universal Orlando decided the photo was offensive enough to remove.