The bold design is from a joint venture between Populous and C.T. Hsu. Populous is a global architectural firm known for high profile projects, including multiple Olympic stadiums and dozens of sports arenas, while the Orlando based C.T. Hsu and Associates is a regular go-to firm for projects around Central Florida, including Universal Orlando’s transportation and parking facility and the mall formerly known as Festival Bay.

The two teams have worked together on previous projects, including on Orlando’s Amway Center and the Orlando City Exploria Stadium. Their commitment to having a diverse staff along with their bold vision for redoing the western end of the North-South Building was enough to convince County Commissioners to give them the contract.

The convention center, already one of the largest in the western hemisphere, has been hesitant to continue expanding.

Multiple secondary venues have filled the void, including massive, privately-owned convention centers within walking distance of the OCCC, most of which have been far more ornate than the airport-terminal-like, county-owned facility. At the beginning of this Universal, who already has two on-site convention centers with a third now under construction, moved further into the field when it confirmed its new Epic Universe theme park close by.

More than any previous theme park, Epic Universe is designed with convention crowds in mind. Every single land has separate back entrances and is able to be closed with minimal impacts on the overall park. This allows each land to be easily rented out for evening or early morning events. The location, visible from the convention center, means that these events are only a short shuttle bus ride away.

With both the increasing competition in the immediate area along with other convention centers like Las Vegas’ upping their game with a $935 million upgrade, OCCC has been slowly working for some time on what its next move should be. The eastern end of the North-South building is slated to eventually expand. Previous proposals included a Pointe Orlando like retail center over what is now the northern retention ponds along Universal Boulevard, but those plans never moved forward, despite renderings of them being posted online.

This latest expansion is less ambitious than previous large-scale projects like the 3 million sq. ft. North-South building itself but look to address the shifting demands of conventions, which now request more breakout rooms for smaller meetings and seminars. Other convention centers have struggled to meet these shifting demands with some attendees resorting to unconventional areas to find quiet spaces, including using restrooms for meetings and work areas.

For years, the OCCC has wanted to add space for large keynote addresses that many conventions feature; a previous attempt included a Yankees ballpark. Often large conventions will use facilities like downtown Orlando's Amway Center or theaters at the region’s theme parks for these keynotes despite these facilities not being convenient to the convention center.

This new expansion will finally address this need via a 200,000 sq. ft. multipurpose venue that can hold up to 20,000 guests, roughly the same size as the Amway Center. Currently, the largest theater at the OCCC is the 2,643 seat Chapin Theater. The new multipurpose venue will be more than seven and a half times its size.

A separate ballroom is included in the plans that is nearly 18,000 sq. ft. larger than the OCCC’s current 62,182 sq. ft. Valencia Ballroom. Another 60,000 sq. ft. of additional meeting space, an enclosed corridor connecting the North and South concourses, and an impressive multi-story grand entry are all part of the expansion project.

Orange County Mayor Jerry Demings stated that the expansion will “sharpen our competitive edge and maintain our position as a dynamic location for conventions, trade shows and guests from around the globe.”

The project should be completed by late 2023. 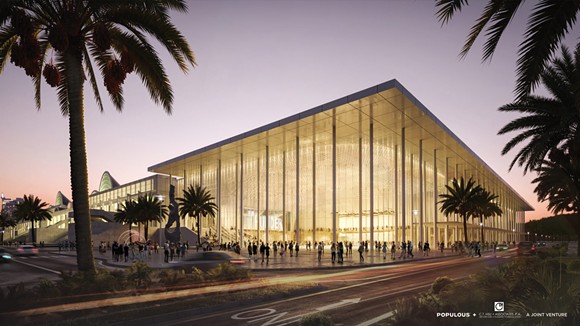