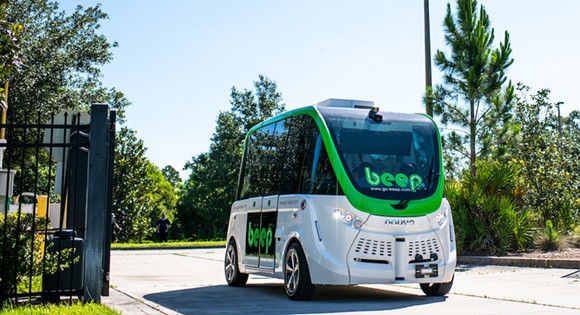 UPDATE AUG. 30: Lake Nona has postponed the press preview of the autonomous shuttle busses, due to Hurricane Dorian: "To ensure everyone’s safety with the approaching hurricane, the service launch and press conference for Lake Nona’s autonomous shuttles have been postponed. We will make sure to share updated details once we have a new launch date." We will provide new updates when they announce a new date.

On Sept. 4, Lake Nona will host elected officials and members of the press for an official launch of their autonomous-vehicle routes.

Two autonomous shuttles will operate on the same fixed route between Lake Nona Town Center (where the Pixon Apartments are located) and Laureate Park Village Center, where the event will take place.

Each shuttle holds up to 10 passengers and will operate at a maximum speed of 15 mph. Called "Move Nona," the shuttles are operated by Beep and manufactured by NAVYA.

Though the shuttles are driverless, a Beep attendant will initially accompany the shuttles until the laws requiring attendants change. The shuttles will operate daily from 10 a.m. to 2 p.m., and 6 p.m. to 10 p.m. The pickup and drop-off spots are the only places to board or exit the shuttles, as they cannot be hailed like a cab.

At first, the rides will be free, paid for by Lake Nona.