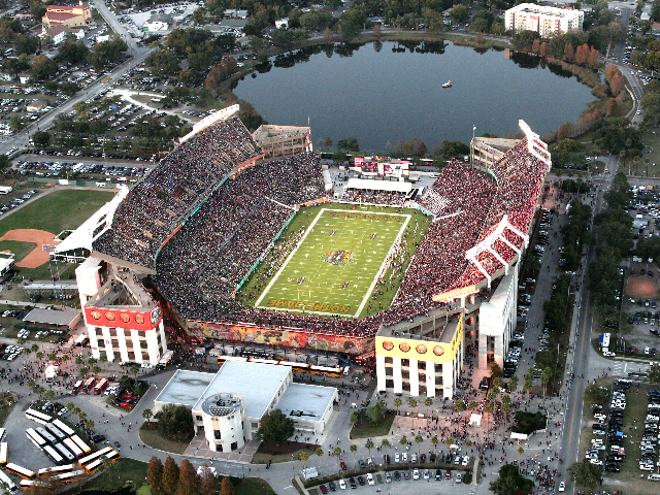 Saturday night's football game between the University of Florida and the University of Miami at Orlando's Camping World Stadium was marred by an attack against the UF marching band by Miami fans following the game.

According to a report by College Marching.com and other sources, Hurricanes fans rushed the UF band while they remained in parade formation leaving the field. Gator Band director Dr. Jay Watkins attempted to stop the Miami fans and ran toward them.

The Miami fans apparently attacked Watkins, slamming his head into concrete after placing him in a chokehold. A band member reportedly sustained a face injury after being punched in the nose.

The report says Dr. Watkins "saved multiple members from worse injuries by stepping in to stop these fans and in turn put himself in harms way."

Orlando police issued a statement saying the band was marching to their busses from the stadium when a woman supporting the Miami Hurricanes tried to cut through. When Watkins tried to stop the woman, another fan grabbed him from behind and pushed him to the ground.
WCJB confirmed the incident and reports University of Florida officials acknowledged Watkins was injured after Saturday night's football game against the University of Miami in Orlando.

Watkins was treated on-the scene by the Orlando Fire Department. He sustained a cut to the head but decided not to press charges, though he did ask that a report be taken.

“There was no description of the person who grabbed him given,” said Lt. Wanda Miglio in a statement.

The Gators eked out a clumsy 24-20 win against the Hurricanes in front of a sold-out stadium. This was the first game between the two longtime rivals in six years, and only their fifth regular-season game in 32 years.

More details of the event will likely come to light and we will continue following the story.