Axine M, C-C and Club Goya drop a rainbow of subterranean beats at the Falcon

In her Orlando debut, NYC electronic artist Axine M proved to be a much more urgent and pounding live presence than recordings might suggest. Despite the trance wavelength that her warped, minimal techno maintains, this set came with a rhythmic aggression that sometimes rivaled drum & bass.

But when it comes to intensity, Gainesville’s C-C – who is Andrew Chadwick, the mind behind noise-collage act Ironing – was without peer in a performance that was a particle collider of beats.

Encompassing everything from hardcore breakbeat to manic Latin beats to what sounded like Die Antwoord sped way up, he smashed and stuttered it all together like a noise-freak DJ set clocking in at an RPM on the edge of dance and seizure. Probably his most subversive master stroke was turning a Taylor Swift hit into an assaulting beat stampede. Add in costume headgear and a DIY light rig and you’ve got a post-apocalyptic party.

But one of the evening’s best discoveries was from right here in the 407. Opening the night like a lit flare was Club Goya, the solo project by Xavya of forward-minded hip-hop group Ohtwo.

Club Goya’s experimental rap bumps and thumps on a frequency where the underground and the popular are reconcilable and everything from trap to pop can harmonize.

His live set packed beats of all stripes, from bass to classic hip-hop breaks and beyond. And with a performance of nonstop bounce and motion, he handled it all with a natural, artistic flair that’s much more about real feel than basic-ass old-school posturing. Catch this kid. 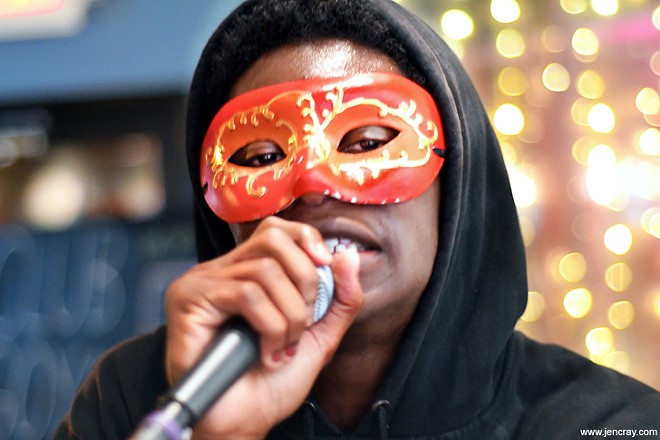