Dorian has become a hurricane, and it's expected to hit Florida as a Category 3 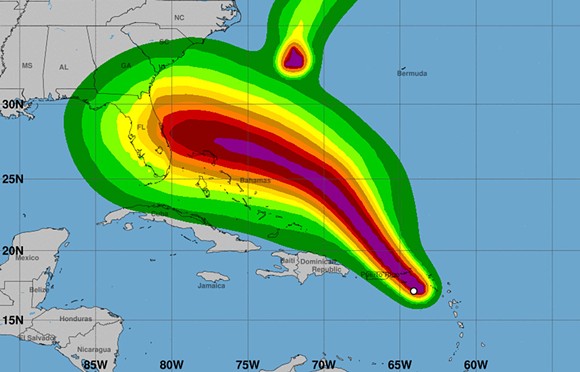 Tropical Storm Dorian officially became a hurricane Wednesday afternoon, as it threatens parts of Puerto Rico and the Virgin Islands, and is also projected to hit Florida’s east coast as a Category 3 hurricane.

As Dorian neared the island of St. Thomas in the U.S. Virgin Islands, forecasters with the National Hurricane Center upgraded the storm after recording sustained winds of 82 mph and gusts up to 111 mph.

It's still too early to predict the storms exact path and strength, but in the 2 p.m. NHS advisory, forecasters say the storm is still moving at 13 mph, with Florida remaining in the 5 day cone of uncertainty.

Central Florida Counties are already preparing residents with sandbags and other supplies.

“Heavy rainfall over portions of Puerto Rico and the U.S. and British Virgin Islands could produce flash flooding during the next couple of days,” said the hurricane center. “Heavy rains are expected to occur over portions in the Bahamas, Florida, and elsewhere in the southeastern United States later this week and into early next week.”

Yesterday, President Trump declared an emergency in Puerto Rico, ordering federal assistance for local authorities. Though Puerto Rico will likely avoid a direct hit from Dorian, the storm is expected to gain strength and speed over the coming days.

“All indications are that by this Labor Day weekend, a powerful hurricane will be near the Florida or southeastern coast of the United States,” said the NHS report. “Now is the time to begin thinking about what kinds of preparations you might need to make over the next couple of days."

If current predictions hold, Dorian could hit Florida as early as Saturday or Saturday night, with maximum sustained winds at 115 mph, says the NHS.

“The risk of dangerous storm surge and hurricane-force winds is increasing in the central and northwestern Bahamas and along the Florida east coast, although it is too soon to determine where these hazards will occur,” the hurricane center said. “Residents in these areas should ensure that they have their hurricane plan in place, not focus on the exact forecast track of Dorian’s center.”

Currently, Brevard and Volusia Counties are now expected to take a direct hit from Dorian by at least Monday, before the storm travels west across the state towards the Tampa Bay area.

Dorian is now the second hurricane of the Atlantic storm season.