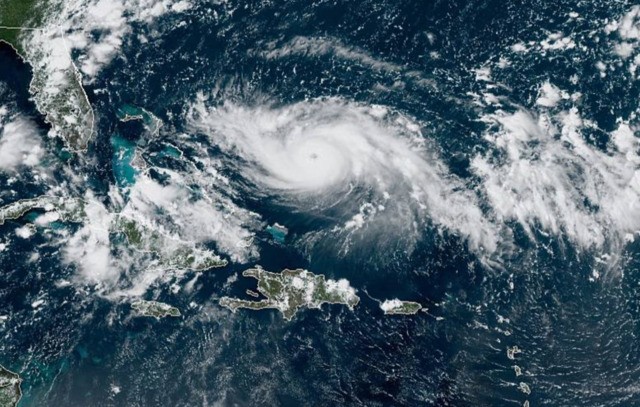 Packing 115 mile per hour winds, Dorian is now a Category 3 hurricane, as it approaches the Bahamas with Florida in its sights.

According to the 2 p.m. advisory from the National Hurricane Center, Dorian is now a major hurricane and is considered “extremely dangerous.”

The current track of the storm shows Dorian slowing down even more than previously reported, bringing an increased amount of wind and rain to Florida’s coast sometime at the end of Labor Day weekend. When it reaches Florida, Dorian could bring a storm surge of 10 feet or more, and as much as 6 to 18 inches of rain, says the agency.

“On this track, the core of Dorian should move over the Atlantic well north of the southeastern and central Bahamas today and tomorrow, be near or over the northwestern Bahamas on Sunday, and be near the Florida peninsula late Monday,” said the advisory.

A Hurricane Watch is in effect for the Northwestern Bahamas. 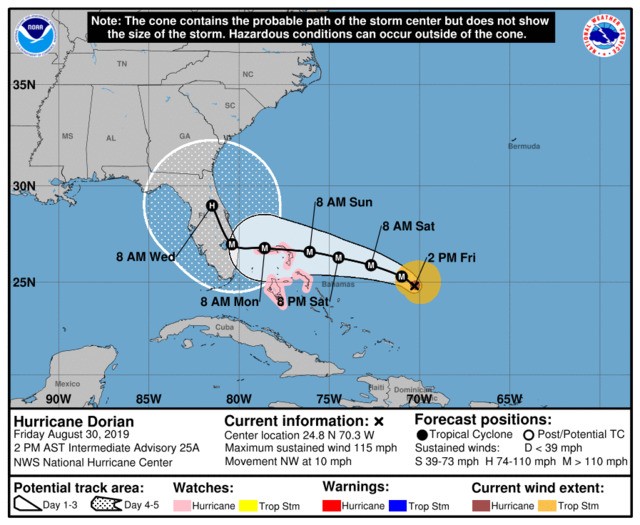 The NHC believes the storm will strengthen over the next couple days to a potential Category 4 hurricane with 140-160 mph winds before making landfall on Florida’s Coast. As of now, it’s unknown exactly where the hurricane will touchdown, but South Florida is certainly in the crosshairs.

Dorian’s track, as of now, shows it moving north after making impact with the coast and then heading directly towards downtown Orlando by Wednesday morning as a Category 1 hurricane, with winds of 75 mph and gusts up to 90 mph.

“Floridians need to be prepared,” said Gov. DeSantis said. “The bad news of the storm going slower is that that could potentially have some negative impacts once it reaches landfall, but you do have time before it reaches to prepare if you have not done so.”

President Donald Trump, who cancelled a trip to Poland to monitor the storm, referred to Dorian as an “absolute monster” Thursday evening.

“The winds seem to be building at a tremendous rate. It looks like winds are going to be unbelievably high,” said Trump video posted on Twitter. “Hopefully we’ll get lucky, but it looks to me that this time it’s heading in one direction, all indications are it’s going to hit very hard and it’s going to be very big.”

On Thursday, Florida Gov. Ron DeSantis also declared that all 67 counties are under a state of emergency. “This provides state and local governments ample time, resources and flexibility to prepare as the exact landfall location of Hurricane Dorian continues to fluctuate,” said the governor’s office in a news release.