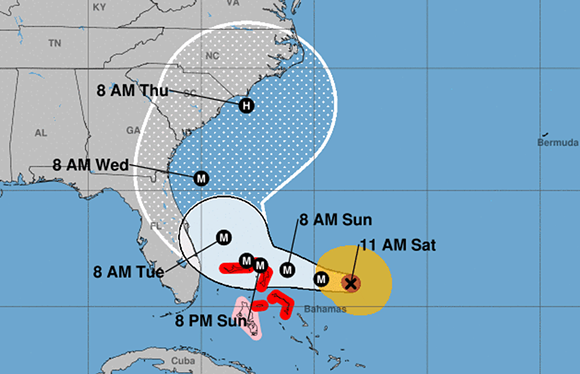 After picking up strength overnight and becoming a major hurricane, Hurricane Dorian now has sustained winds of 150 mph, bringing it just 7 mh below a Category 5. Predictions for its path still show Orlando within the "cone of uncertainty" of where the eye will travel.

Saturday’s 8 a.m. National Hurricane Center update included NOAA Hurricane Hunter data showing winds within the Category 4 storm increasing to 145 mph. Predictions for the path of the storm still look serious for Central Florida, which is not yet out of the "cone of uncertainty."

The NHC says the eye will be near the Florida east coast late Monday, which is different from previous tracks that put the storm more directly over the state. Still, the NHC advises Floridians to remain cautious.

Significant impacts could also occur even if the center of #Dorian stays offshore. With the change in the forecast, the risk of strong winds and life-threatening storm surge is increasing along the coasts of Georgia and South Carolina during the middle of next week. pic.twitter.com/7yI3bxa8ti

"It should be stressed that the new forecast track does not preclude Dorian making landfall on the Florida coast, as large portions of the coast remain in the track cone of uncertainty," the NHC wrote.

"Interests in southern and central Florida should continue to monitor the progress of Dorian," the NHC added. "Watches may be required for portions of the east coast of Florida later today."

We’re waiting to hear from Florida Gov. Ron DeSantis, who took precaution and declared a state of emergency for all of Florida on Friday morning.

The @HRD_AOML_NOAA Hurricane Hunters are providing valuable radar data in the inner-core of #Dorian this morning. Here's a look from the @NOAA_HurrHunter radar on the most recent trip through the center. Get the latest Dorian forecast at https://t.co/tW4KeFW0gB pic.twitter.com/v1eJxhmj5w

A weather.com report has Orlando with a 20% chance of precipitation on Saturday morning and a high of 91 degrees, with stray afternoon thunderstorms expected.