The latest advisory from the National Hurricane Center in Miami has Hurricane Dorian's strength and path unchanged from earlier Saturday.

"Dorian is moving toward the west near 8 mph, and a slower westward motion should continue for the next day or two, followed by a gradual turn toward the northwest," says the advisory. "On this track, the core of Dorian should be near or over portions of the northwestern Bahamas on Sunday, and move closer to the Florida east coast late Monday through Tuesday."

Impressive radar image of Hurricane #Dorian from the NOAA Hurricane Hunters from the eye. The NOAA and Air Force Reserve aircraft are both in #Dorian collecting critical data. The hurricane remains at category four strength. Latest here: https://t.co/14zAQHyiEh? pic.twitter.com/L9o40pAQsx

“I would remind people that, as you’re looking at these forecasts, a bump in one direction or the other could have really significant ramifications in terms of impact,” DeSantis told reporters Saturday morning, after receiving an update at the state Emergency Operations Center in Tallahassee.

The projected cone of the storm, which offers a general idea of where Dorian could make landfall, was looking more “positive” for Florida, DeSantis said.

By late Saturday morning, Dorian had developed into a Category 4 storm with 150 mph winds, appearing to spare Florida a direct hit.

But life-threatening storm surges are still possible along portions of Florida’s eastern coastline by early to mid-week, according to an 11 a.m. National Weather Service advisory Saturday morning.

DeSantis said earlier that the latest forecasts had “dramatically” lowered the chances of an impact on the southwestern and northwestern portions of the state, compared to two days ago, when “the cone covered almost the entire state of Florida.”
However, the storm’s eastward track “is not something you can just hang your hat on and let your guard down,” the governor told The Weather Channel around 10 a.m. Saturday.

DeSantis urged Floridians to heed warnings from local officials, including evacuation orders, and to avoid locations that could be dangerous to visit during a storm.

“When you have storms approaching, it creates waves that attracts people because they want to do that. But that is hazardous and that’s very dangerous,” the governor said.

While the projected path of the storm may not hit the state head-on, DeSantis said he is still concerned about “major flooding events” and “significant” storm surge in some parts of the state. He pointed to areas along the St. Johns River, the longest river in the state.

“There are a lot of spots around the state that will be affected by this, even if this does stay off the coast,” he added.

DeSantis, who is dealing with his first storm as governor, said he is trying to be very “factual” and “direct” about Dorian's potential danger, adding that his administration has tried not to “overreact” to the storm.

“I think the fact that we’ve taken that approach, people look and say, okay, it looks like there’s been positive movement, but we’re not out of the woods yet,” the governor told reporters.

U.S. Sen. Rick Scott, sporting the ubiquitous Navy baseball cap that became so familiar to Floridians throughout his eight-year tenure as governor, also appeared on The Weather Channel Saturday morning.

“Always remember you can rebuild this house,” he said. “You can’t rebuild your life.”

Don’t take any chances. Hurricane #Dorian still poses a serious threat to Florida and continues to strengthen and shift. We must continue to take this storm seriously.

My top priority is to keep Florida families safe. Go to https://t.co/zg5PzyPTMT and get prepared. pic.twitter.com/o38mAEQv6Q

DeSantis, meanwhile, told reporters at the EOC that he has kept in touch with President Donald Trump throughout the storm.

“He offered support, but we’re not sure that that’s going to be necessary,” the governor said, adding that he will continue to coordinate with federal officials. 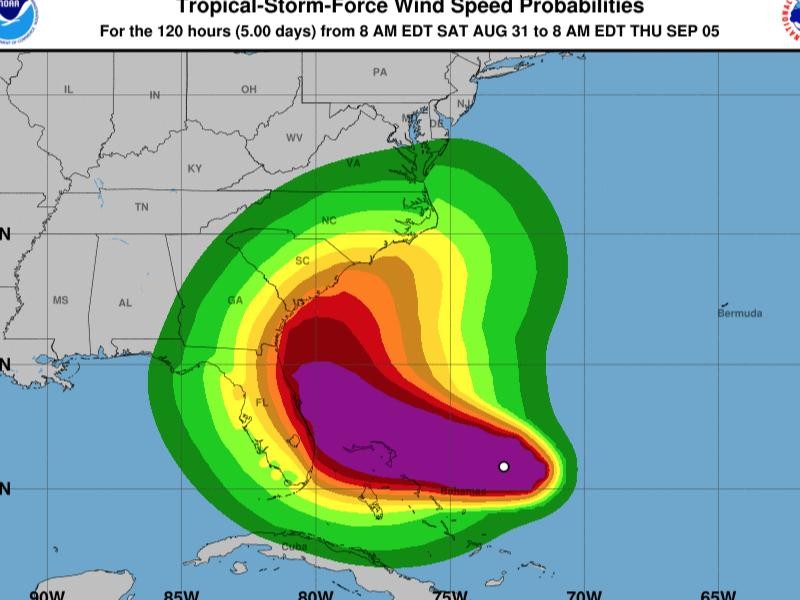 DeSantis also has been working to address a gas shortage in some communities. The governor said the Florida Highway Patrol was able to escort fuel trucks from ports to gas stations throughout the night Friday, but he expects the storm’s latest forecast will reduce demand.

“As the track shifted a little bit, I think you’re naturally going to see less people in say, Miami-Dade County, waiting in line for gas,” he said.

Attorney General Ashley Moody said Saturday morning her office has seen an increase in complaints related to price gouging, with about 1,400 reports so far. She said the majority of complaints are associated with water and gas prices, with some gas prices reportedly going up $2 per gallon overnight.

“We are seeing most of the calls and complaints are coming from South Florida and Central Florida, which is no surprise considering the track of this hurricane,” Moody said.

She said her office will continue to monitor the situation, and she urged Floridians to remain vigilant of “bad actors.”
Stay on top of Orlando news and views. Sign up for our weekly Headlines newsletter.