Florida likely to avoid a direct hit, but Category 2 Hurricane Dorian will still cause damage 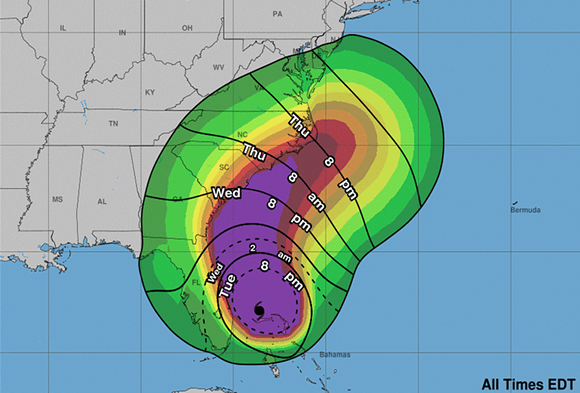 As of 2 p.m., the National Hurricane Center reports Dorian's maximum sustained winds decreased to near 110 mph, and that it is moving northwest at 5 mph. The hurricane is about 105 miles east of Fort Pierce, and is expected to remain a powerful hurricane during the next few days.

People along the state’s East Coast were told Tuesday to continue heeding local warnings as Hurricane Dorian remained a life-threatening storm, even if it is no longer forecast for a Florida landfall.

But while the state isn’t out of the woods, the outlook was much improved from forecasts last week that, at times, had the storm running across the central part of the state into the Gulf of Mexico or up the spine of the peninsula.

“That was very, very close to impacting us in a very, very major way,” Gov. Ron DeSantis said.

Dorian was far less intense Tuesday than over the weekend when it battered the Bahamas. The much-watched cone of probability showed the storm forecast to remain off the state’s East Coast as it headed north toward the Carolinas.

Still, the storm remained a strong hurricane with Category 2 winds of 110 mph, and Dorian is expected to inflict significant damage before getting north of Florida late Wednesday. Along with strong winds, it is expected to bring dangerous surf and storm surges along the Atlantic coast and possible flooding along the St. Johns River.

The latest @NWSWPC rainfall forecast shows that the flash flood threat will increase today and tonight along the
Florida peninsula, then spread up the SE and mid-Atlantic coast during the middle and latter part of the week. The full #Dorian advisory is at https://t.co/tW4KeGdBFb pic.twitter.com/QMiHt3GeLl

“This is going to be riding Florida’s coast for the next day, day-and-a-half,” DeSantis said. “While we think this is a much better track than what we were looking at 72 hours ago, we just ask people to stay safe, remain vigilant.”

The storm, which has flummoxed forecasters, is expected to continue creating havoc in the southeastern United States over the next couple of days.

The National Hurricane Center reported online that the storm will “move dangerously close to the Florida East Coast late today through Wednesday evening, very near the Georgia and South Carolina coasts Wednesday night and Thursday, and near or over the North Carolina coast late Thursday.”

The storm has forced the halting of operations involving planes, trains and ports, while closing retail businesses, including Publix supermarkets, along major parts of the coast.

Palm Beach International Airport, which had hoped to reopen its terminal at 3 p.m. Tuesday, had to delay the plans as the storm’s wind field expanded in size from its center.

“Safe operations is the top priority of PBI and our partner agencies, and it is our goal to resume operations as soon as possible,” an airport spokeswoman said in a mid-day advisory.

Florida Power & Light, which is the predominant electric utility along the East Coast, reported Tuesday it had already responded to about 60,000 outages as tropical-storm force winds have started to sweep through the region.

“Our posture on Dorian has not changed, and we’re treating it as such,” FPL spokesman Dave Reuter said Tuesday from the company’s Command Center in West Palm Beach. “We are still not in the clear, and we remind customers to be ready for the possibility of more outages and extended outages or even more than one outage.”

“Our crews are fueling up for the day, after staging at Daytona International Speedway last night,” Pensacola-based Gulf Power tweeted Tuesday afternoon. “Our sister company, Florida Power & Light, will let us know where we can help with#HurricaneDorian.”

Approx 1,400 FHP Troopers are working 12 hour shifts along Florida’s east coast to keep roads safe and help prepare for the impacts of Hurricane #Dorian. Thank you to the Bravo shift, for keeping the watch throughout the night. #FHP #HurricaneDorian #Dorian2019 @FLSERT pic.twitter.com/0kFwkddLVk

Florida officials have pointed to Hurricane Matthew in 2016 to remind people that a major hurricane doesn’t have to make landfall to be deadly. Matthew also went up the East Coast without making landfall but caused heavy damage in many areas.

DeSantis expressed optimism that Dorian’s impacts won’t be a severe as Matthew.

“If you look at the track of the storm, it’s going to be further off the coast and the rain bands are weaker on the west side of the storm, it seems like,” DeSantis said. “But that is something that they’re obviously bracing for, and that’s something you have to brace for in that area.”

Matthew, which ran parallel to the coast before making landfall in South Carolina, cut power to 1.36 million utility customers across 39 counties; resulted in more than 119,000 property-insurance claims, mostly in Brevard, Duval, Flagler, St. Johns and Volusia counties; and was tied to 14 deaths.

In Brevard County, sustained Category 1 winds were recorded while the eyewall sat 25 miles offshore. Matthew also caused flooding in the St. Johns River and other areas.

A storm-surge warning is in place from the Jupiter Inlet north to the South Santee River in South Carolina.