It's a good time to talk about Florida Sen. Rick Scott and that Navy hat 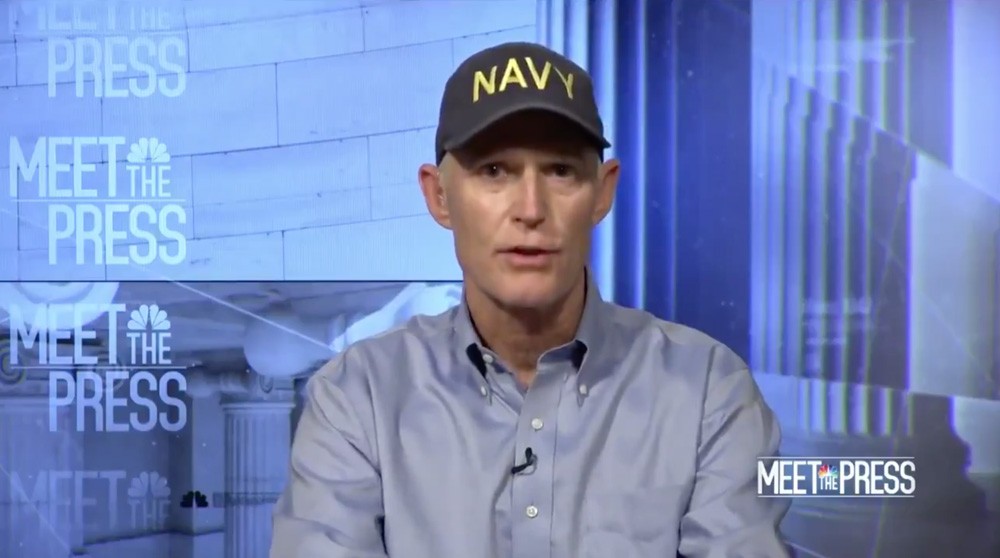 As governor for eight years, now-Sen. Rick Scott used to be responsible for leading Florida's emergency notices, ably reading Teleprompter scripts written by state authorities. But he was also a notorious control freak, shutting out media from his twice-daily briefings with emergency managers.

Stated best in the Venice Gondolier Sun, "Throughout his two terms, as danger loomed, reporters couldn't hear what was being said and couldn't ask state emergency managers to explain or comment because Scott, bristling with authority in his Navy cap, was the only one authorized to speak."

That "NAVY" cap brings to mind Scott's long eight years in office, especially as Hurricane Dorian becomes his first experience as a U.S. senator with a Florida-threatening major hurricane.
As Dorian began grinding into the Bahamas just off the Florida coast, we increasingly saw Scott appearing on TV again, offering words of warning to Floridians – despite the fact that Ron DeSantis is now governor of Florida, and has resumed the regular emergency press briefings kept routine by governors Jeb Bush and Charlie Crist.

And Scott has been wearing the Navy hat again. On Sunday's Meet the Press, Scott inexplicably wore it indoors for an interview with Chuck Todd.

.@chucktodd: "Do you think we have too many guns in circulation?"@SenRickScott: "I believe in 2nd Amendment. I don’t want to take guns away from law-abiding citizens." pic.twitter.com/8Q9q619EjM

And he wears it on most TV appearances during storms.
i

And he wore it on CNN.

My main goal's to make sure all Floridians are safe during & after a storm. Hurricane #Dorian's a powerful & deadly storm. Everyone needs to do their part & take necessary precautions. Tonight's the last chance to evacuate & gather supplies before conditions become too dangerous. pic.twitter.com/qX6MEwXRtW

We're not the first to report this, but it's a good time to remember that Rick Scott served a total of 29 months in the Navy, between 1971 and 1974. And while Naval service is admirable, and something no one at this publication can claim, it must be pointed out that Rick Scott's unusually short term was sweetened by profiting off of his shipmates.

Journalists who are veterans, like the Palm Beach Post's Frank Cerabino, have expressed their disgust at the hat, pointing out that Scott sold soda to shipmates at an enormous markup while at sea, even bragging to the Tampa Bay Times: "I made more money selling soft drinks on the ship than I did getting my pay."

After his Navy term, Scott was not done exploiting his fellow servicemen.

As ads from VoteVets pointed out during his 2018 senate race, "under Scott's tenure as CEO of Columbia/HCA, the for-profit company was fined $1.7 billion for defrauding millions from Medicare, Medicaid and TRICARE, a military health care program," citing Columbia/HCA's settlement with the Justice Department.

We're calling out @FLGovScott for constantly wearing a 'NAVY' hat, after defrauding millions from Medicare, Medicaid and the military TRICARE health care program, with a $4 million ad buy in Florida. #FLSen https://t.co/qaBf1X6bsi

USA Today covered the Navy hat controversy, reporting "the ad specifically targets the defrauding of the military's health care and his pleading of the Fifth Amendment during a civil case about the matter. It even includes decades-old footage from Scott being deposed under oath."
During his eight years as governor, Scott did little to address the climate crisis – at one point reportedly prohibiting state staff from using phrases like "climate change" – and continues to dance around the subject today. This is despite the fact that Florida sustains more electrical blackouts than anywhere else in the country.

Scott also failed to give Florida nursing homes enough time and resources to implement his demand that they have working generators for power outages during storms. Now, he says it “makes you mad” that fewer than half of Florida’s nursing homes are not complying with state generator requirements, after 12 Broward County nursing home patients died following Hurricane Irma.

"They’ve had, what was it, two years," Scott said at the National Hurricane Center in Miami on Monday.

"This is a change from the run-up to Hurricane Irma in 2017, when Scott strongly urged people to evacuate, resulting in huge traffic jams as millions fled ahead of that storm. DeSantis has also spent more time at the state emergency operations center than Sen. Rick Scott did as governor."

Perhaps after eight years of opaque, frustrating leadership during hurricanes, and as entire capitol cities are sinking and needing to be relocated from climate change, it is hard to take seriously one senator's none-too-subtle call for authority by wearing a hat signifying his service to a country he later defrauded.

Versus those 29 months in the Navy, Rick Scott was a greedy hospital CEO for 10 years, and an environmental-deregulation governor for eight long years, sued for his inaction by adults and children alike. He is thankfully no longer the governor of Florida, but it's time someone reminded him.

Sen. Rick Scott, it's time to put the hat away for good.