UPDATE: SeaWorld has now announced a third press conference on the same day for SeaWorld San Antonio where they will announce that park's 2020 wooden coaster attraction.

After postponing a press event last month, SeaWorld Orlando has now announced that they will be hosting dual press conferences with their sister park, Busch Gardens Tampa, on Sept. 12. The two press events, taking place at the exact same time, are confirmed to be focused on the parks' upcoming 2020 attractions.

Both parks are already preparing for next year, with construction well underway. Busch Gardens Tampa has been teasing their new 2020 attraction since late last year.

Since closing in 2015, Gwazi’s future has been uncertain, but at last year’s media event announcing the multi-launch Tigris coaster (which opened earlier this year), the park acknowledged that a major new attraction would be coming in 2020. Then earlier this year, they announced that the Rocky Mountain Construction-rebuilt Gwazi would be the world’s steepest and North America’s tallest hybrid wooden coaster.
Hybrid wooden coasters, like Fun Spot’s Mine Blower, are becoming more common as parks look to keep the thrills of a wooden coaster but want bigger thrills and less maintenance. A modern era of high thrills hybrid coasters started in 2011, with Rocky Mountain Construction’s rebuilt New Texas Giant coaster at Six Flags Over Texas. Since then, RMC has become one of the most sought-after coaster companies in the world with their coasters now being found on three continents and an ever-increasing fan base treating trips to new coasters like religious pilgrimages.

Once the RMC redo of Gwazi opens next year, Busch Gardens Tampa's impressive coaster lineup will undoubtedly become a must-visit park for enthusiasts. More details on the reimagined Gwazi should be shared at the press event, hopefully including the new name for the coaster. Many parks who have RMC-rebuilt coasters often opt for names that reference the previous attractions, such as Six Flags Over Texas’s New Texas Giant being the updated name to the former Texas Giant and Six Flags Magic Mountain’s Colossus being renamed Twisted Colossus. It is unclear if Busch Gardens will keep any aspect of the previous attraction’s name or theme.

Beyond the new name, Busch Gardens may also share the first full on-ride concept POV and possibly some of the retail offerings related to the new coaster. A more narrowed opening time frame might also be shared though it is still a bit early to expect a specific date. Busch Gardens confirmed that media will be given a hard hat tour of the attraction’s construction site as part of the press event.

At SeaWorld Orlando, much less is officially known regarding their 2020 attraction. Permits confirm that it will be a switch track coaster located near Wild Arctic. The multi-launch steel coaster is similar to one now rumored for SeaWorld San Diego with both being themed to Wild Arctic, though in San Diego it would replace the Wild Arctic simulators. While the Orlando version would have a similar theme, it wouldn’t interact with the Wild Arctic attraction, allowing for the simulators to remain.

In a trend seen throughout SeaWorld parks, the new SeaWorld Orlando coaster is expected to embrace the Wild Arctic theme, essentially creating a new Arctic-themed land for the park. This is somewhat surprising, considering the multiple rumors regarding Wild Arctic’s demise. The Wild Arctic theme has been hinted at by the park with their use of the #BreakTheIce hashtag in teasing the new attraction.

The Orlando 2020 coaster would include a unique back and forth pendulum-like multi-launch beginning that features a bunny hop like hill over guest pathways multiple times. A large "top-hat" steep-hill element will provide new motion and interest along the lakeshore, while bringing a thrill ride to an area of the park that has until now remained mostly quiet.

Just as with Busch Gardens’ new coaster, the name and opening date for the SeaWorld Orlando’s new coaster have yet to be shared.

Just like with new attractions now confirmed for Busch Gardens Williamsburg and SeaWorld San Diego, both of the two new coasters heading to the Florida parks align with an internal slide deck that was leaked in 2018. That also means these 2020 attractions will be the last major projects that are a holdover of plans predating the entrance of the company’s new CEO, Gustavo “Gus” Antorcha.

With the projects that predate him now beginning to wrap up, his vision for the company should start to be more evident over the next year. Despite being a very different layout, the Busch Gardens Williamsburg coaster will use a similar launch system to Orlando's new coaster. Both new coasters are expected to open by summer 2020. 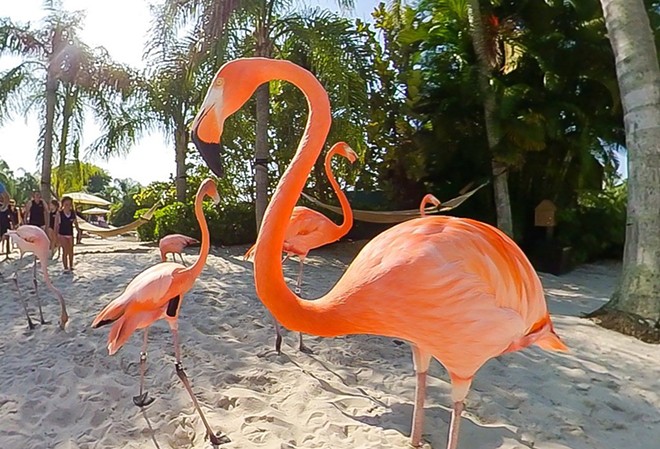 Other details that may be mentioned at the press events include a new attraction confirmed for Tampa’s Adventure Island water park, and more information about a new flamboyance of flamingos that was recently moved to Discovery Cove, as well as a possible new attraction for SeaWorld Orlando’s Aquatica water park, though that last one is unlikely.