White House map of Hurricane Dorian confused everyone on Twitter 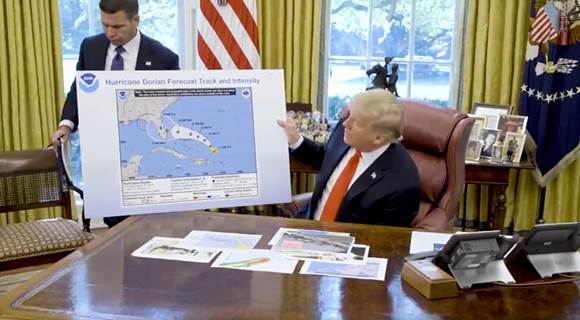 There's a picture making the rounds on Twitter of President Trump presenting a Hurricane Dorian trajectory and folks find it confusing.

Ryan Breton, a meteorologist based in Maine, pointed it out on Twitter. It appears a black mark is extending Dorian's trajectory to Alabama.

It's not the standard way to draw forecast cones, apparently.

Can't let this go unnoticed. @realDonaldTrump displayed a doctored version of the @NHC_Atlantic forecast for #Dorian.

The black extension past Florida did not exist; that's not how forecast cones are drawn. pic.twitter.com/GqHikOBYU6

Trump did say that what he was holding was an original projection, and original maps from the National Hurricane Center did project that Dorian would reach Alabama.

Tropical-storm-force winds from #Dorian could begin in parts of Florida *as early as* Sunday morning. Now is the time to think about what kinds of preparations you might need to make and listen to advice from your local emergency officials https://t.co/yChCF6oWL9 pic.twitter.com/KAFnJSd0Gy

But Twitter users pointed out Dorian's current path looks nothing like the old map that the president presented in his short video update posted online.