Informed Dissent: All the president's Sharpies 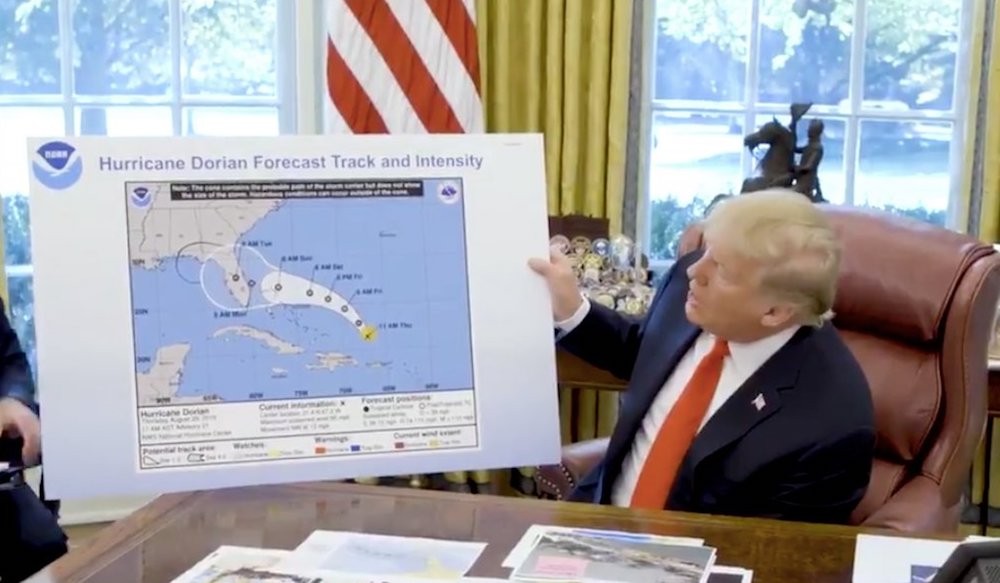 If you've wondered how we reached Peak Stupid, you should get to know Thomas Hofeller

I suppose I can't not write about Sharpie-gate, as much as I'd rather not. After all, of the myriad episodes that have defined the Trump administration's idiocracy, few have reached this peak of stupidity.

A week ago Saturday, with Hurricane Dorian bearing down on the U.S., President Trump warned that it posed a serious risk to Alabama, though forecasters had days earlier said Alabama was out of danger. The next day, after receiving calls from worried residents, the Birmingham office of the National Weather Service tweeted that "Alabama would NOT see any impacts from the hurricane."

Alabama will NOT see any impacts from #Dorian. We repeat, no impacts from Hurricane #Dorian will be felt across Alabama. The system will remain too far east. #alwx

For reasons best left to a psychologist, Trump refused to let it go. He spent the next week obsessing over it, insisting that he was right and the NWS experts (and the media that covered them) were wrong and fake.

By Wednesday, he was in the Oval Office with a hurricane forecast with Aug. 29 altered by hand with a Sharpie to include Alabama in the storm's projected path. By Friday night – after the storm had left the North Carolina coast, and we were still talking about this – the National Oceanic and Atmospheric Administration issued a statement "correcting" the NWS' tweet from a week earlier and backing the president. (The justification: One model showed a tiny chance of tropical storm-force winds in a sliver of Alabama.)

By Sunday, the Washington Post had reported that, the day after Trump's Alabama flub, NOAA sent a directive to NWS meteorologists ordering them not to contradict the president, even though he was wrong and they were right, and part of their job is to correct misinformation. NOAA sent a similar directive after the Sharpie display.

"I have never been so embarrassed," the head of the NWS union tweeted Friday.

Under different circumstances – say, if he were hosting a reality TV show – the president's pathetically pathological need to be right and his lackeys' compulsion to assuage his fragile ego might be amusing. But this is real life, where undermining the credibility of the government's information during a disaster puts lives at risk.

This is part of a larger problem, of course. On Friday, the website Business Insider reported that "aides and confidants are concerned about his mental state after days of erratic behavior and wild outbursts." According to one former White House official: "His mood changes from one minute to the next based on some headline or tweet, and the next thing you know his entire schedule gets tossed out the window because he's losing his shit."

Dr Neil Jacobs, NOAA Acting Administrator, delivered the keynote at #NWAS2019 today. You could hear a pin drop. He is a good man placed in a horrible situation. I have real compassion for him and his family. https://t.co/qoWW6c8cRw pic.twitter.com/rBeyc7Yuxn

In the U.K., when Trump-lite prime minister Boris Johnson tried to go around Parliament to facilitate a disastrous no-deal Brexit, defections within his own party blocked him and then prevented him from calling snap elections. Country was more important than party. Here, administration officials have shown no such spine, even on matters as banal as Sharpie-gate.

The higher the stakes – and the more unhinged Trump becomes – the more dangerous that gets.

Plenty of ink has been spilled explaining how we got here – how, since the civil rights movement, the Republican Party's embrace of white racial grievance and cultivation of authoritarianism in its pursuit of power have destroyed liberal democracy's guardrails, allowing a pernicious oaf like Trump into the Oval Office. But we shouldn't overlook the behind-the-scenes roles played by men like Thomas Hofeller, who made the radicalization of the GOP possible.

Hofeller, who died last year, was a Republican redistricting consultant, a number-cruncher who helped gerrymander congressional and legislative districts all over the country,

Much to Republicans' chagrin, Hofeller's daughter turned over thousands of his files to government watchdog group Common Cause. Last week, the New Yorker reported their contents. As you'd expect, they showed that Hofeller compiled "intensely detailed" data on race, as well as things like whether college students were likely to have the state-required ID to vote.

The files show that Hofeller was involved in Republican gerrymandering efforts in Arizona, Mississippi, Alabama, Virginia, Texas and Florida, and that "he was part of a Republican effort to add a citizenship question to the census ... which Hofeller believed would make it easier to pack Democrats and minorities into fewer districts, giving an advantage to Republicans." Trump, you'll recall, championed this cause – even after the Supreme Court rejected the question because the administration couldn't be bothered to hide its political motives.

Hofeller and the Republicans who employed him contorted democracy to their own ends. But by creating ruby-red districts in which Republicans could only lose in primaries, they fostered an incentive structure that pulled the GOP further and further right, the kind of asymmetric polarization that, in short order, gave us a president who draws hurricane projections with a Sharpie – and a party that whistles past democracy's graveyard.