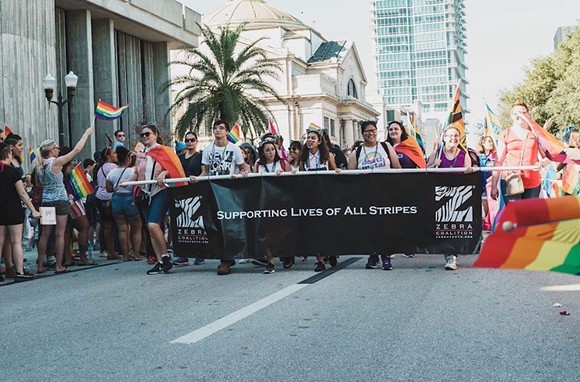 The Zebra Coalition is receiving a sizable and unexpected donation, thanks to one Central Florida employee of AT&T. The funds will help provide housing and other support for lesbian, gay, bisexual, transgender and all LGBTQ+ youth.

Orlando resident Kristian Cosme is the recipient of the AT&T Community Impact Award, created to celebrate employees "who go above and beyond to help their communities thrive through volunteerism."

Cosme was one of six nationwide finalists who received a $5,000 donation to the charity of their choice. After a nationwide vote, he was selected as the overall winner and was given an extra $5,000 to donate toward the Zebra Coalition.

Cosme, a manager at AT&T's call center in Research Parkway has worked with AT&T colleagues to provide large mentoring opportunities since 2010. He's worked with DECA, Junior Achievement, Jobs for Florida’s Graduates and other organizations through the AT&T Aspire Mentoring Academy.

Partnering with 26 Orlando-based institutions that include service groups, government agencies, social service providers, churches, corporations and schools, the Zebra Coalition provides housing and support services for young people in the LGBTQ+ community who are homeless or struggling.

In 2016 alone, Zebra Coalition sheltered 119 youth and provided outreach and training to 307 students from five high schools and 72 teachers and administrators from schools across Orange County.

According to the foundation's website, the Coalition assists "young people facing homelessness, bullying, isolation from their families, and physical, sexual and drug abuse" with programs to guide them to recovery and stability.

We’re celebrating Kristian who is a recipient of the @ATT Community Impact Award. He inspires us by going above & beyond to make a difference in Orlando. #ATTimpact pic.twitter.com/ptvQJHltLv

"The only way that we can make the world a better place is to be involved with it," said Cosme online. "If we're not there for the world, it's not going to be there for us."

This provides some positive press for AT&T, after nine Central Florida sites were protested by communications workers on strike just last month.