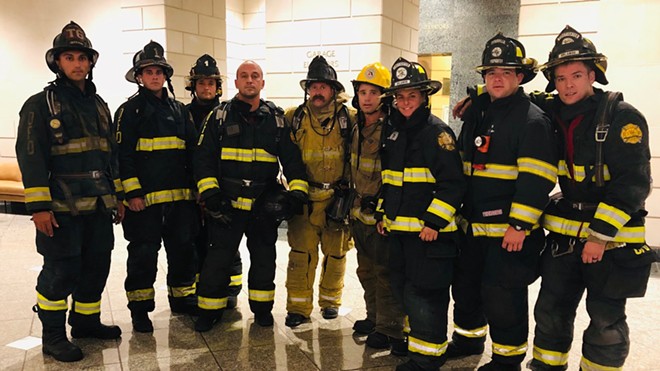 Central Florida firefighters, police, and other authorities and first responders are leading ceremonies to commemorate the 18th anniversary of the 9/11 attacks which killed 2,997, including 412 New York emergency workers.

On Monday, a group of Orlando firefighters climbed 110 flights of stairs inside the Bank of America building to remember the number of floors inside the World Trade Center.

Today these firefighters, wearing their gear, climbed 110 floors of the @BankofAmerica building to honor the fallen first responders who gave the ultimate sacrifice on September 11, 2001. The 110 flights of stairs represent the floors inside of the World Trade Center #NeverForget pic.twitter.com/eYHr9eHTkC

Orlando Fire Division Chief Mike Starlings told WMFE, "A group of us from Orlando went up there a few days after it happened. We were there on top of the pile at the Trade Center with our brothers from the New York Fire Department. It really struck us personally because we knew many of the firefighters that were killed."

Also on Wednesday, the Mount Dora Fire Department and Professional Firefighters of Mount Dora Local 3088 are hosting an inaugural, three-mile 9/11 Memorial Walk at 6 p.m. Many firefighters will participate in full gear.
Kissimmee fire and police participated in a Patriot Day Breakfast commemoration to memorialize those lost and recognize first responders.

The victims of 9-11, who died in New York, Pennsylvania, and Washington, D.C., included 343 firefighters.

Attending the 2019 Patriot Day Breakfast - Remembering & Honoring American Heroes! Keynote Speaker was Michael Troisi NYPD-Ret who spoke of his response on 9/11, which was very moving! Congrats to those that were recognized! pic.twitter.com/GjiYrjAFod

Gov. Ron DeSantis had ordered all flags statewide to be flown at half-staff on Sept. 11, as well.