September 12, 2019 at 1:46 PM
comment
This morning, SeaWorld Orlando invited journalists to the park for a special presentation breaking the news about Ice Breaker, the record-breaking new multi-launch family roller coaster opening in Spring 2020. 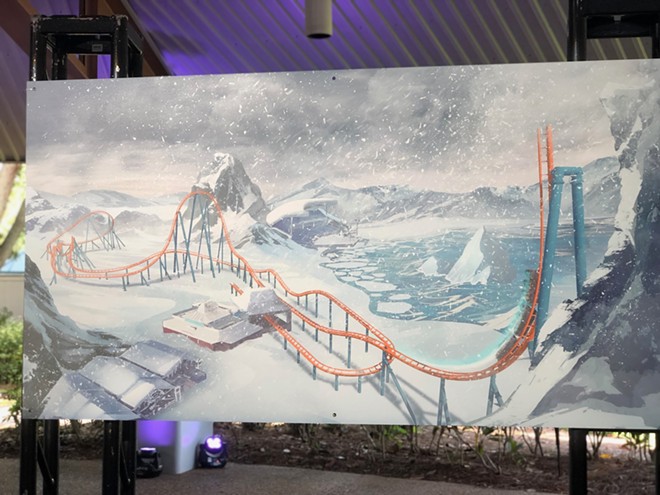 While launched coasters can already be found in Disney's and Universal's parks, Ice Breaker will be the first such ride at SeaWorld Orlando. The Arctic-inspired attraction will incorporate four launches — two backwards and two forwards — including a reverse launch into a 93-foot tall spike with 100-degree angle, which will be the steepest beyond-vertical drop in Florida.

Despite such intense elements, Ice Breaker will only have a 48" minimum height requirement, and will be positioned as a "family thrill coaster," according to VP of Design and Engineering Brian Andrelczyk, who described it to me a "someone's first launched coaster, but something that teens and adults will still enjoy as well."

Ice Breaker is being built near the Wild Arctic simulator attraction, with which it will share a similarly snowy theme. Unlike other recent SeaWorld rides, no plans were announced to integrate live animal habitats into the queue, but the attraction will promote the park's partnership with Alaska SeaLife Center, a marine wildlife research and education foundation.

SeaWorld's coaster lineup is already arguably the strongest in Orlando, and while Ice Breaker appears to be a worthy addition, there's one area of concern. The new coaster, which is being built by Premiere Rides, uses a horizontal sliding mechanism to allow two 18-passenger trains to be in service at one time.

At an estimated 90 seconds (according to Andrelczyk) for a train to complete one circuit, Ice Breaker would have a maximum theoretical capacity of only 720 riders per hour.  For comparison, the new Hagrid's Magical Creatures Motorbike Adventure at Islands of Adventure, which received national attention for its massive multi-hour queues, has been cycling over 1,200 guests per hour, and Disney's Millennium Falcon simulator is capable of handling over 1,900 per hour.

Finally, we finished with a taste of SeaWorld's Craft Beer Festival, which is running now through October 27. Because every good PR team knows the quickest way to a reporter's heart is with alcohol and waffles for breakfast.